Arrow is a 7-year old, 16.1h Thoroughbred gelding. He was bred to be a racehorse and registered with the Jockey Club, however he never raced. Courtney first laid eyes on Arrow when he was 3 years old. He was on full time pasture turnout at the time, green broke, and was ridden occasionally for trail rides in the mountains. As soon as Courtney saw Arrow in person, she immediately knew she was going to buy him that day. He was exactly what she was looking for----a big, beautiful gray Thoroughbred with a stunning conformation and big personality. Since there was a lot of interest in Arrow, Courtney decided against waiting for a pre-purchase exam and bought him on the spot.

Three years later (when Arrow was 6 years old), while Courtney was riding Arrow, she noticed that he made a “roaring”-like noise. Besides the abnormal noise, he also started to tire quickly during exercise---even when asked to perform easy work, such as collecting at the walk. Arrow was displaying symptoms of exercise tolerance, which were initially subtle, but progressively worsened over the course of a year. Eventually, it got to the point where Arrow wasn’t able to trot without gasping for air.

Courtney scheduled an appointment for Arrow to see her veterinarian, South Valley Large Animal Clinic (SVLAC). At the appointment, Dr. Rees performed a standing endoscopy on Arrow to have a look at his larynx---the structure connecting the nasal passage to the trachea (windpipe) in his upper airway. Dr. Rees discovered that Arrow’s left arytenoid cartilage in his larynx was completely paralyzed (grade 4, of 4). 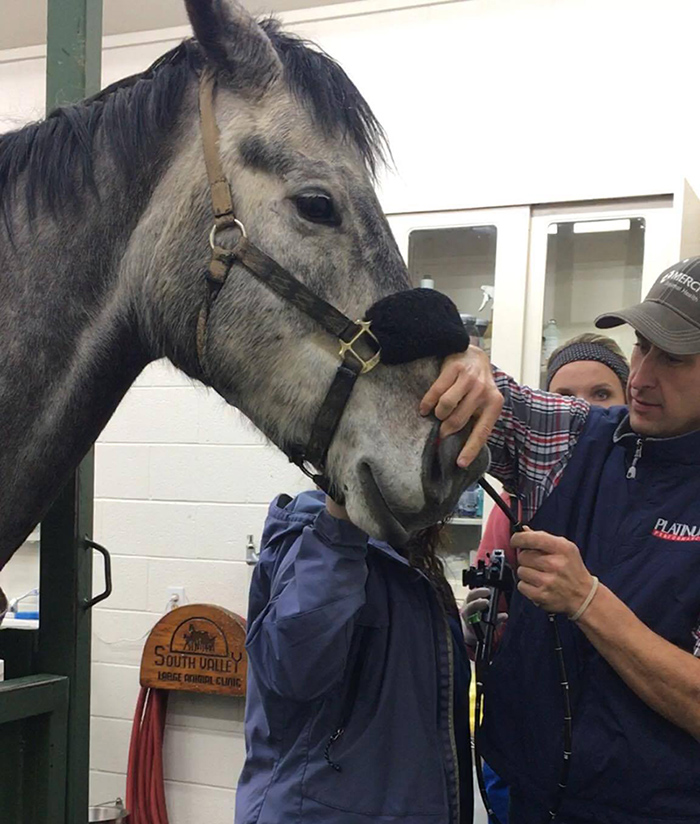 Dr. Rees performing a standing endoscopy on Arrow
Normally, this cartilage is supposed to open as he took a breath, allowing for maximum airflow into his lungs. However, being paralyzed, it wasn’t opening and instead was obstructing the airflow. This is what was causing the abnormal respiratory noise (the “roaring”) when Arrow was exercised. Arrow suffered from recurrent laryngeal neuropathy (RNL)—also known as laryngeal hemiplegia or “roarers”. RNL is most frequently reported in Thoroughbred racehorses, between 3 to 7 years of age. It is usually seen in male horses over 15 hands. Arrow was a 6-year-old, 16.1h Thoroughbred racehorse gelding.

Treatment options vary---all requiring surgery. Dr. Rees recommended a prosthetic laryngoplasty (otherwise known as a “tie-back” surgery) for Arrow, performed while under general anesthesia at their clinic. He would make a 4-5 inch long incision in Arrow’s throat latch area, in order to get access to the paralyzed arytenoid cartilage, in order to “tie back” the structure, so that it remained open via sutures.

Courtney was both nervous and excited on the day of Arrow’s surgery. She was able to watch the entire process---everything from induction, the surgery itself, to his recovery. However, certain parts of the process were a bit difficult for her to watch, such as when Arrow was getting lifted by his legs onto the surgery table, and when waking up from the anesthesia in the recovery stall. Throughout the whole process, the staff at South Valley Large Animal Clinic made Courtney feel very confident and at ease. Everything went smoothly during Arrow’s surgery and there were no complications.

Arrow getting lifted onto the surgery table (left photo) and while prepping him for surgery (right photo)
Upon waking up from the anesthesia, Arrow was lead into an ICU stall where he would remain in hospitalization for two days post surgery. He immediately started coughing once in the stall, which Courtney was a bit concerned about, however Dr. Rees assured her that this was normal and was nothing to be concerned about---as long as it didn’t persist.

Arrow was discharged from the clinic after 2 days of hospitalization, and was placed on stall rest back at Courtney’s barn for the next 8 weeks. After the first week, Courtney could start hand walking him for 10 minutes daily. She monitored the area where the surgical incision took place—Arrow’s throat latch, to make sure it stayed clean to reduce any risk of infection. During this time, Arrow would cough whenever he ate and drank.

Eight weeks post surgery, Dr. Rees came out to the barn to examine the surgical site and to remove the sutures. It had healed well, without any scaring. By this time, Arrow was no longer coughing when he ate or drank. Courtney could finally begin slowly starting Arrow back in work.

For the first month or two, Arrow developed slight nasal discharge which Dr. Rees assured was normal. Other than a slight change in the sound of Arrow’s whinny, he made a full recovery from his surgery which was a success!

What Courtney has learned from this experience

"I learned it was a risky surgery that may or may not have worked. I am 100% happy with my choice and the outcome. I feel like it gave Arrow the chance he deserved to be a happy and productive horse. I gave him 2-3 weeks longer recovery time just to make sure everything was healed. I slowly transitioned him back into his regular work load and he came back better than expected!"


Keep up with Courtney and Arrow