Asher is a 9 year-old American Warmblood gelding who lives in Levy County, Florida with his owner, Leigh. Leigh and Asher compete in hunter shows, participate in foxhunts and pleasure riding. Leigh was present the day Asher was born, and she has raised him from a foal. He lives in a large 5 acre pasture with his mother, Prima, and their lifelong companion Dusty, a 20-year-old quarter horse gelding. The pasture contains a small pond, which all the horses have access to.

Asher as a foal with his mom, Prima (left photo), galloping on his own (middle photo) and as a full-grown adult (right photo)

One evening in late June, as Leigh was bringing Asher in from his pasture for dinner she noticed that he had specks of blood all over his front legs. At first, she thought that he had gotten bitten by a lot of mosquitoes. As he ate his meal, Leigh started to hear ‘drip, drip, drip’---as tiny drops of blood continuously but slowly dripped into small, newly formed puddles of blood on the ground below him. Her eyes traveled up to where the blood was originating and came across a huge, ‘bigger than softball-sized crater’ on Asher’s ventral abdomen (the underside of his belly where the girth would sit). It was itchy, swollen, and obviously bothering him a great deal.

Leigh immediately called her primary veterinarian. Unfortunately due to health issues he wasn’t able to come out to the farm to examine Asher, but he reviewed the photo she took of the ‘crater-like substance’. He suspected that it was related to some type of animal attack---a bite from a small alligator, black widow spider, pygmy rattler, or summer sores (cutaneous habronemiasis). He referred Leigh to Dr. McCleery from McCleery Equine Veterinary Services.

Upon arrival, Dr. McCleery performed a physical exam on Asher, while asking Leigh some questions about his history. One of the most important being whether Asher had access to any stagnant water source (particularly in the form of a pond, swamp, or wetland) in his pasture. Leigh explained that there was a small pond that he had full access to in his pasture. In fact, she even caught him wading in it on several occasions. 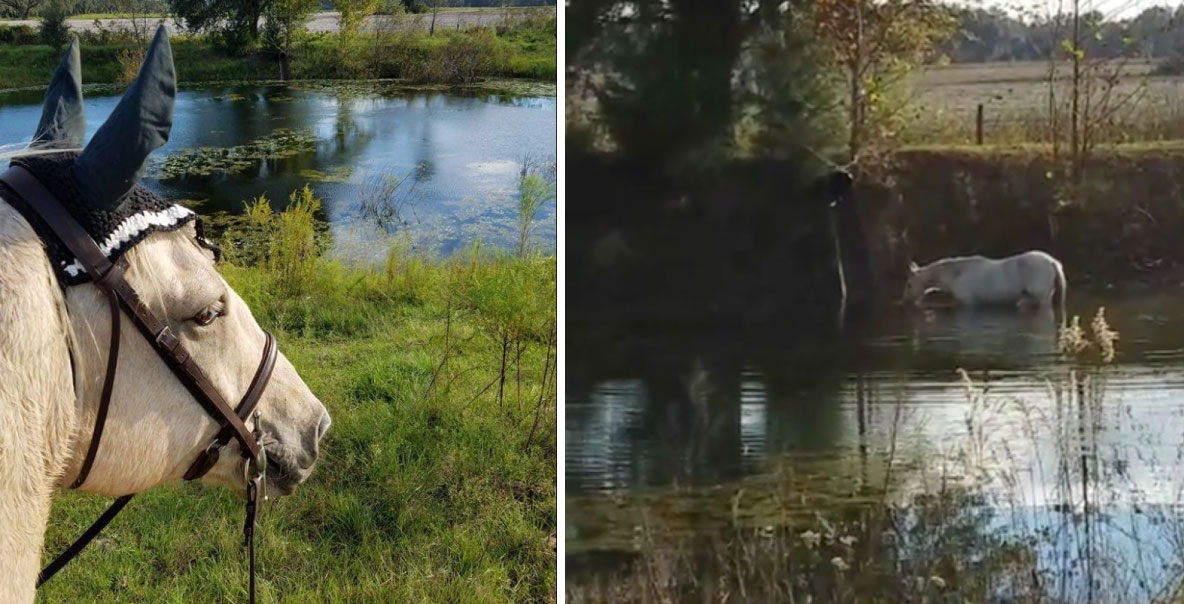 The pond in Asher's pasture. Notice Asher wading in it, up to his belly.
Dr. McCleery suspected that Asher had equine pythiosis, otherwise known as swamp cancer, which is caused by Pythium insidiosum, a fungus-like waterborne organism that can affect the skin, bones, intestines, lungs and arteries of horses and other animals. The organism is most commonly found in water and moist soil (such as swamps, wetlands, and ponds) in tropical, subtropical, and some temperate regions. The pond was the likely source of Asher’s exposure to the organism.

Horses affected by the cutaneous form of pythiosis (which is the most common form in horses), typically develop lesions on their limbs or ventral abdomen. These lesions consist of a granulomatous nodule with ulcerative tissue or a fistula tract which contain kunkers (coral-like necrotic tissue).

Dr. McCleery debrided the lesion to remove the infected tissue. She also took 19 skin punch biopsies to send to the University of Florida for a histopathologic examination to confirm her diagnosis. While awaiting the results, Dr. McCleery recommended proceeding with treatment as if Asher had pythiosis, which included:

Asher on stall rest, wearing his bandage (left photo), and how the lesion looked after the first cold hosing session the same day that he was seen by Dr. McCleery (right photo).
Leigh went through at least one roll of vetwrap for each bandage change, for she had to wrap it around Asher’s entire body. Dr. McCleery explained how the biggest risk for Asher at the moment was if the lesions spread to other areas of his body, which could potentially lead to systemic sepsis. Therefore it was important for her to closely monitor the lesion for any changes.

Four days later, Dr. McCleery came back out to assess how Asher’s wound was healing. During the examination, she debrided the lesion a second time in order to remove some left over infected tissue.

Asher’s pythiosis lesion 48 hours after receiving the first part of immunotherapy vaccine (day 6)
One week later (day 10), Dr. McCleery returned to the barn for a follow up progress exam on Asher, and to administer the second part of the immunotherapy vaccine Unfortunately, there was a minor complication---Asher managed to get bit or stung near his eye. Therefore, Dr. McCleery recommended that Leigh keep a close eye on Asher for the next 30 minutes, and left her with epinephrine in case he had a reaction. Thankfully, Leigh didn’t have to use it.

Thirteen days after receiving the second vaccine (day 25), Dr. McCleery returned to administer the third and final part of the immunotherapy vaccine for Asher’s pythiosis. Leigh still continued to apply the topical medication to Asher’s wound daily, and a reduced dose of oral corticosteroids every other day.

Asher’s pythiosis lesion one week (day 32) after receiving the third and final immunotherapy vaccine (left photo) and 16 days later (day 48) (right photo)
Once the lesion was reduced to the size of a silver dollar and was barely a surface scratch in depth, Asher was taken off of the corticosteroids and no longer needed to receive the special topical medication. However, Leigh was instructed to monitor it closely and to apply furazone/swat to the lesion to keep the flies off of it.

Asher’s lesion on day 65
By day 65, Asher’s pythiosis lesion was barely recognizable! He has since fully recovered and back to his old self! Leigh and Asher have even started competing again at local Hunter/Jumper shows (with great success!).

Leigh and Asher winning ribbons at a local hunter/jumper show (left photo), and Asher feeling great in his pasture (right photo)
She has since, however, built a fence around the pond to close off access to the horses and other animals (since dogs, cats, and other mammals are also at risk of pythiosis.


About Asher and Leigh

McCleery Equine Veterinary Service is a mobile practice that offers routine and emergency care for large animals. Dr. McCleery specializes in equine veterinary care, but is happy to provide care for other large animals as well (goats, sheep, cattle, pigs, etc.). She provides ambulatory services to clients throughout Marion, Levy, and Alachua counties in Florida.