Callie, formally known as ‘CJ’s Ruler’ is a 4-year-old Thoroughbred filly who spent the first three years of her life as a racehorse. Thankfully, through the Finger Lakes Finest race horse rehoming website---Callie was provided an opportunity to be rehomed, when her racing career was over. The only medical history Caitlin was provided on Callie was that she had recently recovered from a bowed tendon in her left forelimb, which was treated by blistering and stall rest with hand walking for six weeks.

Callie was initially brought to Caitlin’s barn on her property---where she would have a mini companion and access to a small paddock. Caitlin wanted to make sure she eased her into life off of the track by keeping her mostly stall bound, and then introducing the concept of turnout in small doses, using a light sedative in an attempt to help prevent her from accidentally injuring herself. After two weeks of slowly increasing supervised time in her small paddock, then unsupervised time (consisting of Caitlin watching Callie from the kitchen window), where she had access to the full paddock.

The very next morning, Caitlin noticed that Callie appeared lame. Upon examination, Caitlin saw that her lower left leg was swollen and had the typical ‘bowed’ tendon appearance. Callie’s leg was also noticeably warm to the touch. Given Callie’s recent history of a bowed tendon, Caitlin felt certain that Callie had re-injured her tendon. Given that she had some previous experience dealing with horses with tendon injuries----she knew that Callie was going to have to keep Callie in her stall full-time, at least until she was able to be seen by her vet.

Besides rest, Caitlin applied cold therapy and support wraps to Callie’s leg to help control the inflammation. Caitlin initially iced Callie’s leg for 20 minute sessions, twice a day and then later switched to cold water hosing. In between cold water hosing sessions, Caitlin kept both of Callie’s front legs wrapped, for added support and to reduce edema (swelling) ---in the form of a specific technique known as a ‘sweat wrap’. For the first week, in order to help with the pain that Callie was experiencing as a result of the inflammation in her leg, Caitlin administered a small daily dose of bute (an anti-inflammatory) in her feed.

Several weeks later, she made an appointment with her local veterinarian, Dr. Scott Morey from Fenton River Veterinary Hospital, to come out to the barn for Callie. Dr. Morey performed an ultrasound onsite of Callie’s left leg---where he confirmed that she had a small ~4 mm tear in her deep digital flexor tendon (DDFT). Caitlin explained to him what she had been doing so far with Callie for treating her tendon injury, and consulted with Dr. Morey on an ongoing rehabilitation plan. Due to budget constraints, Caitlin opted out of doing any of the special treatments such as shockwave treatment, stem cell therapy, etc. which are often used during the early stages of tendon injuries to help improve the strength of healing tendon tissue.

Callie’s rehab exercise program consisted of complete rest, followed by a very gradual and controlled daily exercises---from hand walking to under saddle work.Caitlin ended up relocating Callie to a boarding facility during her rehab period---which took some of the extra management work off of her. The new facility also had an indoor riding arena, which was beneficial for maintaining Callie’s exercise program on days of bad weather and slick footing.

The tendon healing progress is monitored through periodic ultrasound scans of the injury, which allows the rehabilitation program to be adjusted as needed. After three months of rehab, in order to see whether Callie’s tendon was healing, Caitlin made an appointment with a veterinarian---this time a lameness specialist who was recommended by another boarder at the stable she boarded Callie at. The veterinarian’s name was Dr. Michael Reilly from Connecticut Equine Clinic. He arrived at the stable and performed a follow up ultrasound on Callie’s leg. Upon viewing the ultrasound, Dr. Reilly confirmed that Callie’s tendon had almost completely healed, and that she could slowly return to normal active work.

As of May 2017, Callie is currently up to 20 minutes of under saddle trotting sessions and she is sound!

Other Worthwhile Items To Consider 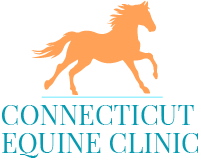 Connecticut Equine Clinic was initially established in 1987 by Dr. Michael Reilly. Since it’s opening, the clinic has provided primarily ambulatory care to the horses of Coventry and the surrounding area. Two other doctors have since joined the practice---Dr. Scott Sears, who has a special interest in therapeutic farrier work, sport horse medicine, primary care, and dentistry, and Dr. Genevieve Williamson, who has a special interest in primary care, internal medicine, and sports medicine.