Chase is a 12-year old Off the Track Thoroughbred (OTTB) gelding who lives in Melbourne, Australia with his owner, Kelli. Chase was considered to be a typical “war horse” in his racing career---having 51 starts as a racehorse, with the last 15 as a steeplechaser. He had been off the track for about 9 months when Kelli started leasing him. She had just got back into riding, after 25 years of being out of the saddle and was keen to find a good eventing horse. Kelli found out about Chase from a girl she knew who worked at the racing stables where he was kept.

Within 5 minutes of test riding him, Kelli knew immediately that Chase would be the perfect horse for her. She loved his cheeky personality and admired his track record—for “war horses” are known for their professionalism and often do very well when given a new career in a different discipline. After 6 months of leasing Chase, Kelli had no hesitation about her decision to buy him.

For the next two years, Kelli and Chase trained together, where they had regular lessons in dressage, show jumping, and cross-country. Kelli boarded Chase at a local riding school, where he was turned out 24/7 in a communal paddock with 8 other horses.

Chase turned out with his buddies in the communal paddock at the riding school
December 2015, Kelli and Chase started competing in one day events (ODE), which was also the start of the summer season Melbourne Australia. That summer was unusually dry, hot and windy, however the two ranked well. One autumn day in March 2016, during the last event for the season, Chase wasn’t acting like his normal self. Throughout the competition, he acted super spooky.

Then, once the two arrived back at the riding school, as Kelli backed Chase out of the horse float (horse trailer), she noticed that he was holding his hind limb up funny. Kelli assumed he just knocked his leg during the ride home. 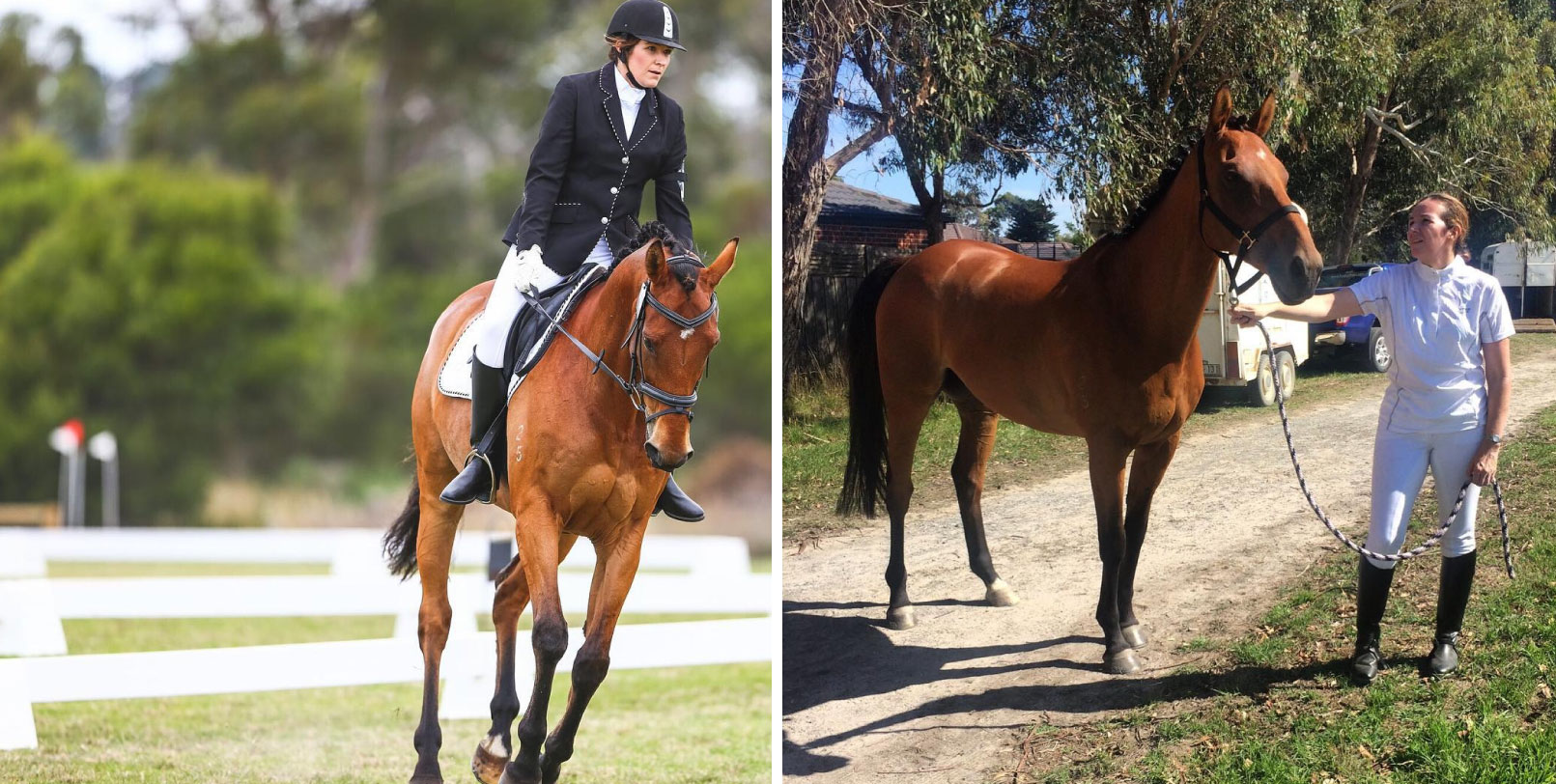 Chase and Kelli at their One-day event competition
Three weeks later, during a riding lesson, Kelli’s trainer thought Chase seemed a touch lame and suggested giving him a week off. A week later, Kelli got on Chase for another riding lesson. This time, her trainer still thought that there was something abnormal about the gelding’s gait. She asked Kelli to trot him around the arena, then to stop for a moment.

She informed Kelli how she thought it looked like Chase was ‘slightly hocky’ in one of his hind limbs---and thought it looked like he had Australian stringhalt. From the ground, she asked Chase to back up, slowly. This made the ‘hockiness’ (high stepping gait of the rear legs) even more apparent. Kelli’s trainer recommended removing Chase from the paddock he normally went out in for the time being, and monitor him over the next couple of days.


Walking Through the Paddock

Australian Stringhalt has been documented for over 120 years in Australia, and its onset has been strongly associated with the presence of catsear (Hypochaeris radicata), also referred to as flatweed, in horse pastures. It usually occurs in horses following a long, dry summer (drought conditions), which stresses the weed and makes it even more toxic.

Kelli decided to walk through Chase’s old paddock and found an abundance of catsear. Catsear is a yellow flowered perennial herb which resembles the dandelion. It initially grows as a rosette full of hairy distinctively shaped leaves. During later grow stages, the rosette sprouts an upright flower stem, with yellow flowers.

Catsear plant Kelli discovered in Chase’s paddock
Kelli reported the presence of the toxic plant to the owners of the riding school, however they disagreed with her and denied its presence. 2 ½ weeks later, four other horses from Chase’s old paddock began to show signs of stringhalt. The owners of the riding stable finally agreed with Kelli about the presence of the catsear plant in the communal paddock. Interestingly enough, the other three horses who were turned out in the same paddock, never developed signs of stringhalt.

A Call to the Vet

Kelli called her primary veterinarian and explained to them what happened to Chase. Given the clinical signs and discovery of the catsear plant were clearly suggestive of the gelding having plant-associated stringhalt, her vet recommended that Kelli immediately remove Chase from the paddock he was in (which she had already done), increase Vitamin E in his diet, and provide plenty of fresh hay daily for roughage. Kelli also turned to various forums and Facebook Groups for advice and ended up adding the following items to Chase’s diet:In addition, Chase received 30 minute acupuncture and equine message sessions once a month throughout his recovery.

The situation became so bad, that Kelli wasn’t able to lead Chase out of the paddock without him having an episode. Chase also would create his own ‘safe zone’ while turned out in the paddock, which was his designated area within the paddock, where he felt comfortable walking. If he walked out of that comfort zone, Chase would suddenly start having a flare up, and refuse to walk forward. Concrete surfaces were also an issue. 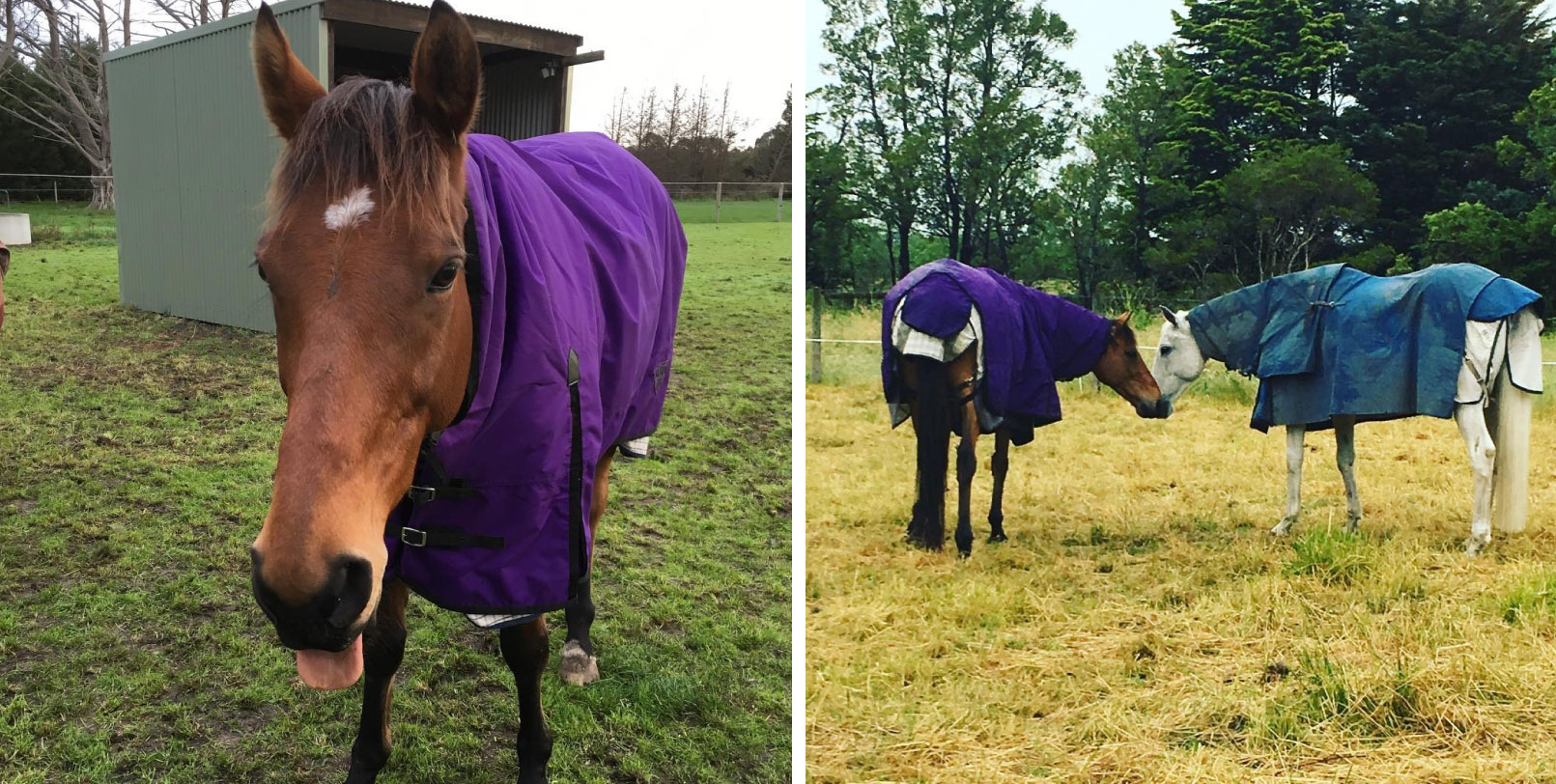 For the first two months, Chase’s stringhalt signs were only apparent at the trot or when he was stressed; he was able to walk normally. During this time, Chase remained in the day yard by himself. For the next 8 months, Kelli moved him in and out of various paddocks on the same property, however Chase showed no signs of improvement. Kelli decided to move him to a different horse stable. This is when Chase finally started to show improvement.

Chase has since, fully recovered from stringhalt. It took him about 18 months to fully recover. Kelli could have brought him back into work earlier, but she wanted to make sure he was completely healed before doing so.


Kelli’s Advice to Other Horse Owners

“Patience, Belief and whatever you do, don’t compare your horse’s recovery to others as they all differ. My horse had it mild compared to three others on the property; however, he took the longest to recover of those that did, and one horse still hasn’t and may never recover. Some people told me to give up, including my instructor and some close family members. They were convinced that Chase would never recover, and urged me to find a new horse. However, I never gave up on Chase. I visited him twice a day every single day for 18 months straight. I continued working with him on ground, and you know I feel like now we have a better relationship than ever and he trusts me. I love him more than anything, and we will get back competing again bigger and better than before---because I have learnt a truckload”