Elliot’s Case Of Laminitis And EMS

Elliot, a ten-year-old Morgan Gelding, who presented with Equine Metabolic Syndrome.
Ten-year-old Morgan Gelding, Elliott, became increasingly lethargic and unwilling to leave his stall in July of 2016. Elliott had been tested and treated for Lyme disease the previous summer and the symptoms indicated a recurrence. After giving the horse two courses of antibiotics with no improvement, his primary veterinarian recommended the owners take Elliott to the Cornell University, Equine and Nemo Farm Animal Hospital (ENFAH).

“Laminitis and Equine Metabolic Syndrome were on the top of our differential lists, based on his clinical signs, and luckily we were able to confirm this quickly,” says Gillian Perkins, medical director of the ENFAH.

Elliot presented some typical features of Equine Metabolic Syndrome (EMS), including being overweight with fat deposits in the neck and rump. Morgans also are among the breeds with a genetic predisposition to EMS. Elliot also exhibited classic signs of laminitis including reluctance to move with a short-choppy stride and increased digital pulse. 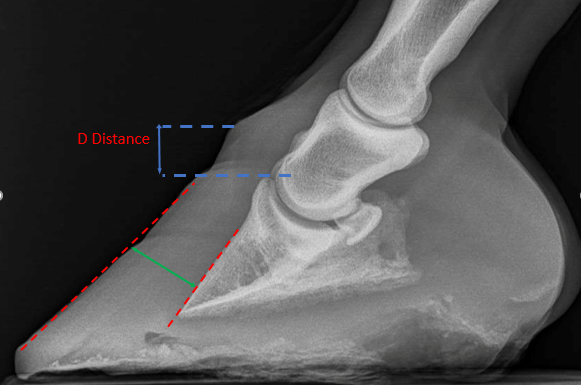 Elliot’s X-ray shows that his pedal (foot) bone has detached and sunk away from the hoof roughly 15 degrees. In a normal hoof, the bone would sit parallel to the hoof wall. Photo credit: CUHA Imaging Service.
To confirm EMS, the medical team submitted a blood sample was submitted to the Animal Health Diagnostic Laboratory’s endocrine lab, one of only a few in the country able to run tests to investigate his glucose and insulin levels, as well as adrenocorticotropin hormone (ACTH). This confirmed an insulin-resistance (IR), which commonly results in laminitis. The ACTH concentration was normal ruled out Pituitary Pars Intermedia Dysfunction (PPID), another cause of laminitis and sometimes concurrent with EMS. X-rays of Elliott’s feet confirmed evidence of laminitis.

“When Elliott first came in the hospital, the main concerns were his level of pain, and the risk that if he was not going to respond to the treatment, severe complications could develop,” says Perkins. If left untreated, laminitis can lead to hoof deformities, hoof abscesses, bone infections and other chronic degenerative changes, as well as in some severe cases, hoof loss. “In many instances, the excruciating pain and the degenerative consequences on the feet can lead owners to choose humane euthanasia,” she adds.

After consultation with the orthopedic service and Head of Farrier Services Steve Kraus ’71, the clinical team decided to trim some of Elliott's toe and heel and to install heart bar shoes to help correct the abnormal angles and allow the new hoof to grow properly. Laminitis changes the biomechanics of the feet—requiring long-term, regular management with specific trimming, sole support and shoes. 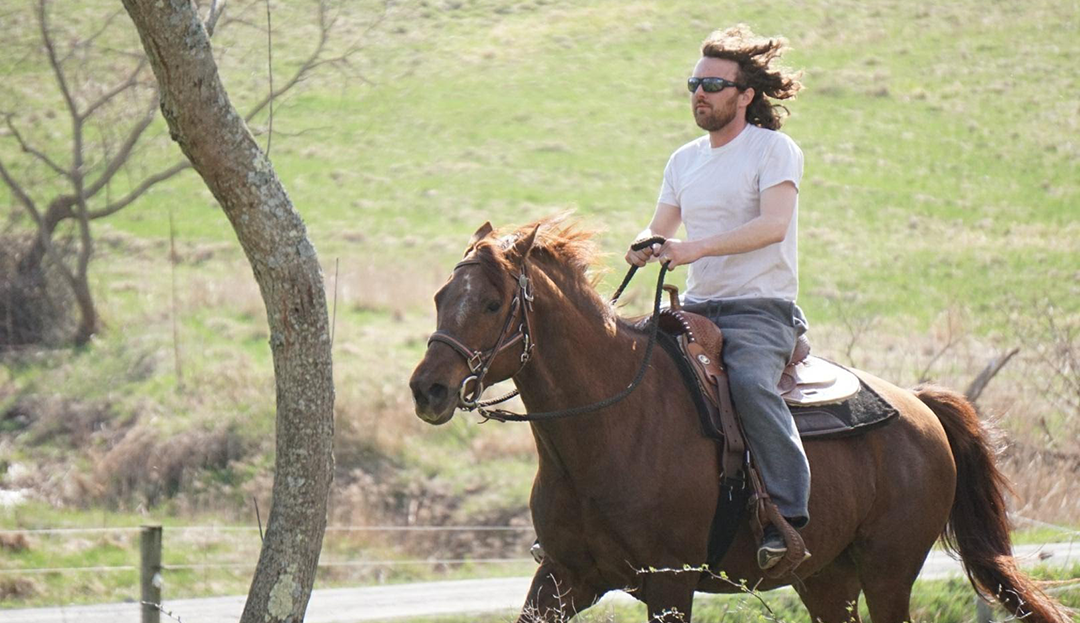 Elliot running with one of his owners. Photo provided.
Immediately after his first visit with Kraus, Elliott showed signs that he was more comfortable on his feet. “That man is a genius. He gave Elliott what we called his ‘magic silver shoes’ and we could see a difference immediately,” says owner Lynn Dibble.

In addition to treating the feet directly, Elliott had to lose weight to control the EMS and keep the laminitis from worsening or recurring. Cornell veterinarians gave the Dibbles a diet and exercise program to carry out at home, placing him on a diet of plain grass hay in an amount equal to 1.5 percent of his body weight, with a balanced vitamin and mineral supplement. The owners also walked Elliott three times a day at 20-minute intervals, increasing exercise as the horse became more comfortable. With this regimen, Elliott has lost nearly 200 pounds.

As the Dibbles live two-hours away from Cornell, many of the evaluations of Elliott’s progress were done on an out-patient basis by phone, followed by coordinated farrier visits and re-check exams at the hospital.

“When he returned to the hospital, he was prancing around and so full of himself. He was like a different horse,” says Dr. Melissa Fenn, a large animal internal medicine resident who saw Elliott on several follow-up visits to the hospital.

Follow-up exams and radiographs showed a significant improvement overall. The angle of rotation of the coffin bone had improved in all four feet.
“The pain of laminitis can be debilitating,” says Fenn. “His was caught in time and the owners did the necessary work. Without their dedication, the laminitis and EMS would have continued to progress and might have even gotten to the point where he couldn’t make a full recovery.”

“This was a case where teamwork between the clinicians, radiologists and farrier, along with the endocrinology laboratory at Cornell University, made an accurate diagnosis and formulated a long-term treatment and management strategy for very dedicated owners who made it all work for Elliott,” adds Perkins.

Elliott has returned to his old, happy prankster self and is being ridden again regularly. “He’s the character he’s always been,” says Lynn Dibble. “We cannot say enough about the staff, not only in terms of their knowledge of their field and their science, but because they also have a genuine compassion, care and concern for their patients. I have a live, healthy horse because of them.”

To learn more about the Equine and Nemo Farm Animal Hospital (ENFAH) at Cornell University, please go to https://www2.vet.cornell.edu/.

Animal Health Diagnostic Laboratory (AHDC) provides veterinary diagnostic services at the College of Veterinary Medicine at Cornell University. Currently the AHDC employs over 200 professionals, including faculty in tenure and non-tenure track positions. The AHDC serves over 5,000 registered veterinary practices or organizations from all 50 states of the United States and several foreign countries. The AHDC is one of the most comprehensive veterinary diagnostic laboratories in the country, receiving over 180,000 submissions per year that generate over 1 million individual tests. All these activities generate an enormous number of informal and formal interactions with Center clientele and other stakeholders of our services. All these combined activities represent significant contribution to the health and wellbeing of society in general as well as the protection of the economic wellbeing of the animal industries and animal populations of the State of New York and the nation as a whole.

To find out more about AHDC, please go to https://ahdc.vet.cornell.edu.