The Mystery Of The Barrel Racer

The barrel racer’s bone scan showed a hot spot right where the spine attaches to the base of the skull, indicating an injury. But the radiographs were inconclusive. Hammer’s primary veterinarian consulted with colleague Dr. Christopher Ryan, New Bolton Center Radiologist. Ryan said the athletic Quarter Horse would be a candidate for a clinical trial using New Bolton Center’s EQUIMAGINE robotics-controlled imaging system.

The new technology captures three-dimensional, high-resolution computed tomography (CT) images in the standing and moving horse without the need for anesthesia. Penn Vet is the first veterinary teaching hospital in the world to own the revolutionary technology. 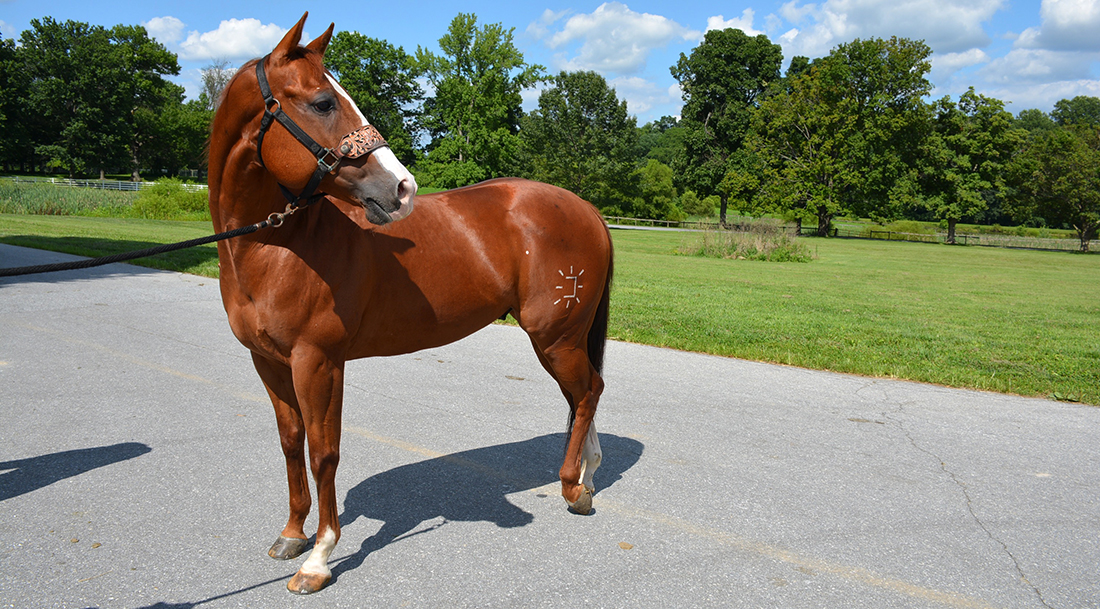 Hammer at New Bolton Center After his CT Scan with the EQUIMAGINE system
“If he had a neck fracture or any other serious lesion, we would be concerned about the recovery from anesthesia,” Ryan said. “A standing CT was a good option.” Nikki Becker, Hammer’s owner and rider, brought him from their home near Saratoga, NY, for the scan. “I couldn’t create a plan of action until we came to New Bolton Center to know what we were looking at,” Becker said, noting that Hammer had been on strict stall rest. “Fortunately, we got the answers that we were looking for.”

Becker bought nine-year-old Hammer, whose registered name is CC Fancy Big Shine, in September of 2015. A competitive rodeo rider, Becker was actually looking for a roping horse for her husband, but wanted a horse that also “had a barrel-racing pattern” as a back-up. The two were just getting started on their promising rodeo season, placing in race after race on the barrel-racing circuit, turning in times in the 16-second range. Then Hammer had two freak trailer accidents one right after the other.

First he got his head caught in the trailer window bars on the way home from a rodeo on June 17. Three days later, he spooked and reared up while tied to the trailer, and his two front legs came down full force on the lead rope. “It was the scariest day of my life,” Becker said. Her friend brought her a knife so she could cut the line to free the tangled-up Hammer. Even after that dramatic accident, Hammer showed no signs of injury, and Becker continued workouts and competitions. Weeks after the incidents, Hammer exhibited “small changes,” but nothing that would indicate an injury, Becker said. 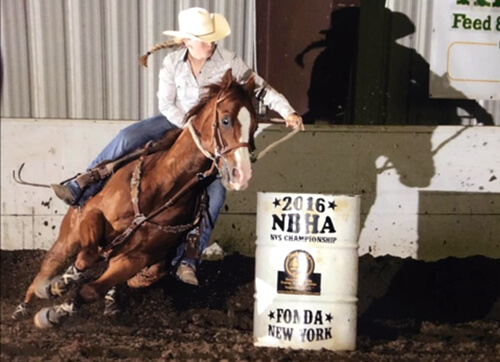 Nikki Becker rides Hammer in a barrel race
Until the weekend of July 17.

Hammer wasn’t quite himself during the barrel race at the pro rodeo in Vermont that Saturday. The champion went wide on the first barrel, stumbled a bit on the second, then rounded the third barrel perfectly, crossing the finish line in 16.5 seconds. He earned third place. Becker took him to local jackpot the next day, confident he would perform better. So when Hammer ran by the first barrel, refused the second, and toured the ring on the third, Becker was embarrassed, and very concerned. “I knew in my gut that something was wrong,” she said. “I know my horse and I knew something wasn’t right. I called my vet on Monday.”

Hammer’s primary vet is Dr. Steven Sedrish of Upstate Medical Center in Schuylerville, NY. He took radiographs, but couldn’t see anything definitive. Then he took a bone scan, and a “hot spot” showed up in Hammer’s cervical vertebra, where the halter lies. 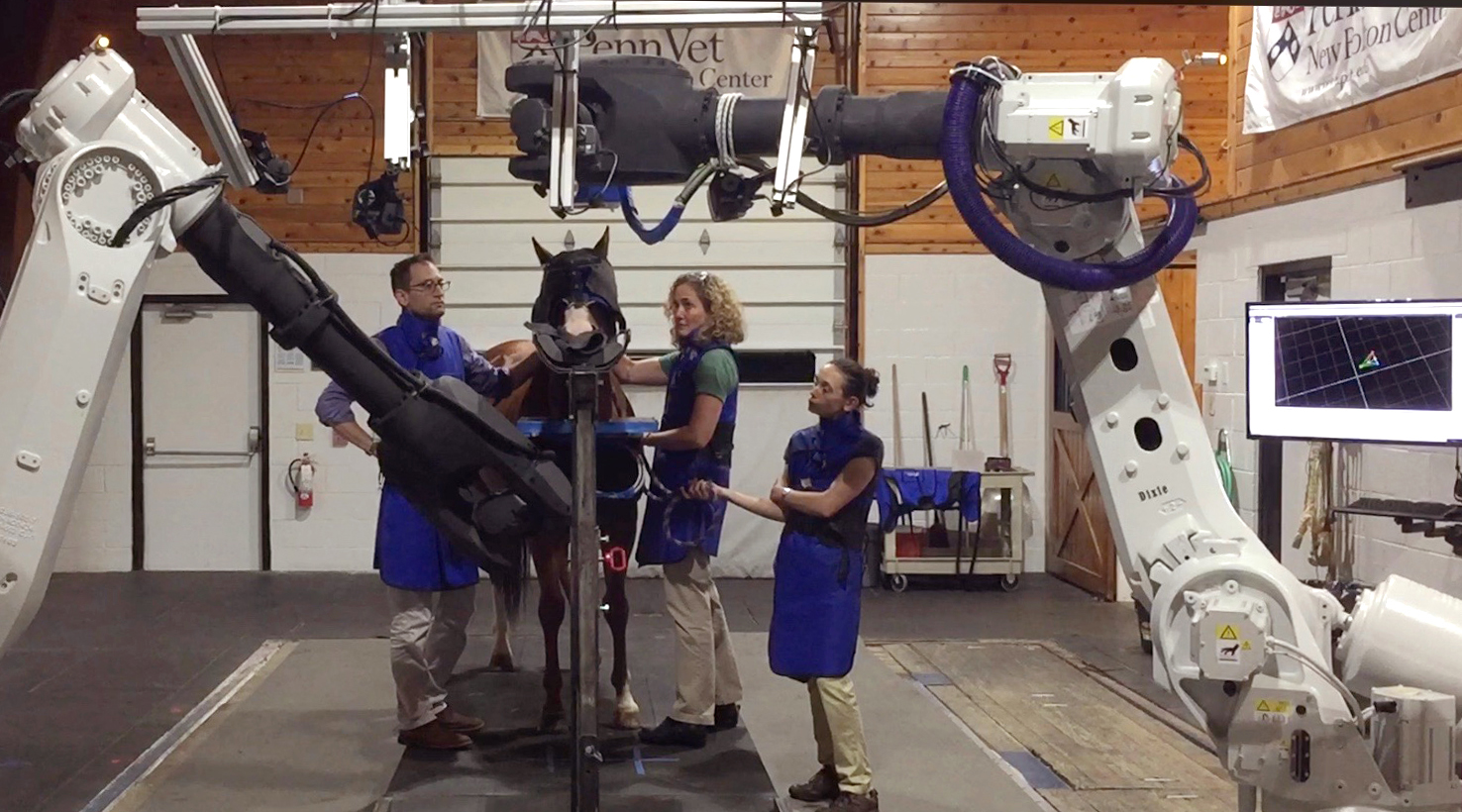 Drs. Christopher Ryan, Barbara Dallap Schaer, and Hope Douglas position Hammer within the CT arms
Becker brought him to New Bolton Center for the CT scan on August 4. Ryan and Dr. Dean Richardson, Chief of Surgery, handled the case. Hammer was the first adult horse to have a scan of the neck in the imaging system. The sedated horse is positioned between the two, industrial robotic arms that hold the x-ray tube and digital x-ray detector plate. The arms move in unison around the head during the CT scan collecting numerous digital images, which takes only about 30 seconds to complete. These images look more like radiographs or “x-rays” and are then reconstructed by a computer into what looks like a more traditional CT scan. 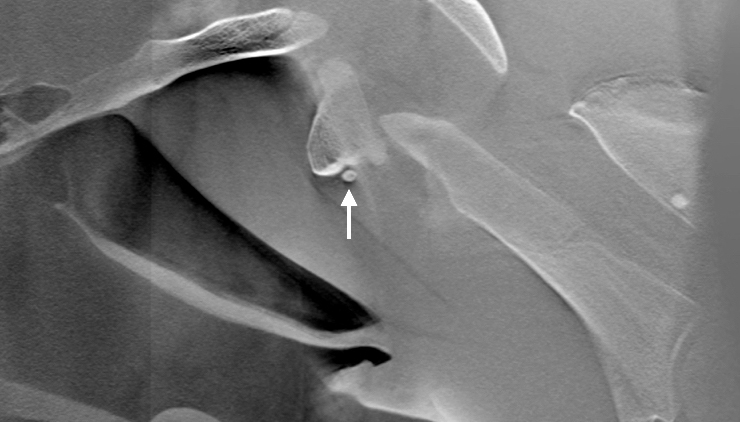 The CT scan shows the tiny avulsion fracture, at the arrow
“We were actually able to see a tiny avulsion fracture on the CT scan,” Ryan said, while pointing to the digital scan on his computer screen. “It’s a fragment of bone that got pulled off of the parent bone by a ligament that attaches there,” he continued. “It’s on the first cervical vertebra, called the atlas.” The bone scan and the CT scan correlated well with each other. “The bone scan provided us with the right general area to search in and the CT scan was able to identify the exact injury,” Ryan said. “Without the CT scan we may never have known what the exact cause of the ‘hot spot’ on the bone scan was or even if it was a significant finding.”

"We knew, theoretically, that this CT imaging system would be a huge advantage,” Ryan continued. “To have it prove itself was nice.” Becker was relieved to get an answer. “They found something that we couldn’t see before,” she said. “Finding something is better than nothing, since it told us where to go from there.” Knowing the extent of the injury, Hammer has been limited to stall rest to give the bone and ligaments time to heal.

Usually Becker rides Hammer three miles a day, and races three or four times a week. Hammer, she said, has taken her riding “to the next level,” allowing them to enter the most competitive division at professional rodeos. “I was very fortunate to come across this horse,” she said, noting that the 14.3-hand registered Quarter Horse is a grandson of well-known Shining Spark. “I knew in my gut he was the one for me.” 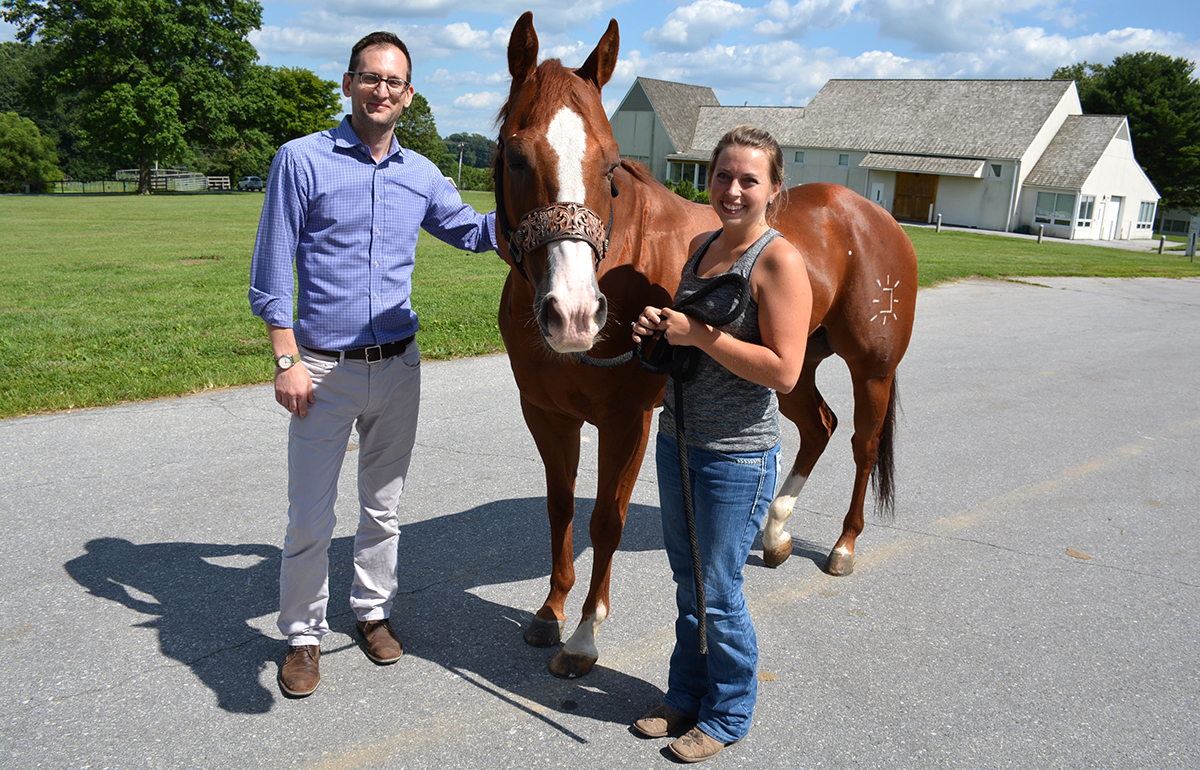 Dr. Christopher Ryan and Nikki Becker pose with Hammer at New Bolton Center
This year she bought her professional rodeo card, becoming a member of the American Professional Rodeo Association. For Becker, who got her first horse at 10 years old, going to rodeos is a way of life, riding in jackpots since she was a teenager. During the day, she runs a restaurant with her mother, serving breakfast and lunch. She then loads Hammer into the horse trailer/motorhome rig she bought this year and hits the road to rodeos. Her husband, Brad, and their two boys often come along. “I won my first barrel race ever this spring in Vermont, running a time of 16.6, and the season took off from there,” she said. “This horse has already made my dreams come true.”

Now she will care for Hammer over the winter, creating a small turnout outside his stall to keep him happy and safe. In four months, she will take him for another bone scan with the hope that the injured area is healed. “My biggest hope is that Hammer makes a full recovery and that his study helps someone else in the future,” she said. “How amazing to have Hammer be a part of something special like this clinical trial.

“I’m feeling pretty lucky. At least now we have answers. Now on to the healing part.”

From “The Mystery of the Barrel Racer”, by Louisa Shepard, September 2016, Penn Vet Extra, University of Pennsylvania School of Veterinary Medicine. Reprinted with permission. http://www.vet.upenn.edu/about/press-room/publications/penn-vet-extra/penn-vet-extra-september-2016/mystery-of-the-barrel-racer

Upstate Equine Medical Center, PLLC is a multi-veterinarian practice offering 24/7 service in the Saratoga, New York area. Both ambulatory service and hospitalization are available, the latter in their new, state of the art medical and surgical center.