Case Of A Horse With A Maxillary Sinus Cyst

One afternoon, a gelding, that was used as a general riding horse for his owner, was brought into Fourways Equine Clinic. His owner first noticed that there was a problem when they were riding him as the gelding would make unusual respiratory noises. In addition, they noticed that part of his face had some localized facial swelling, just below his right eye. 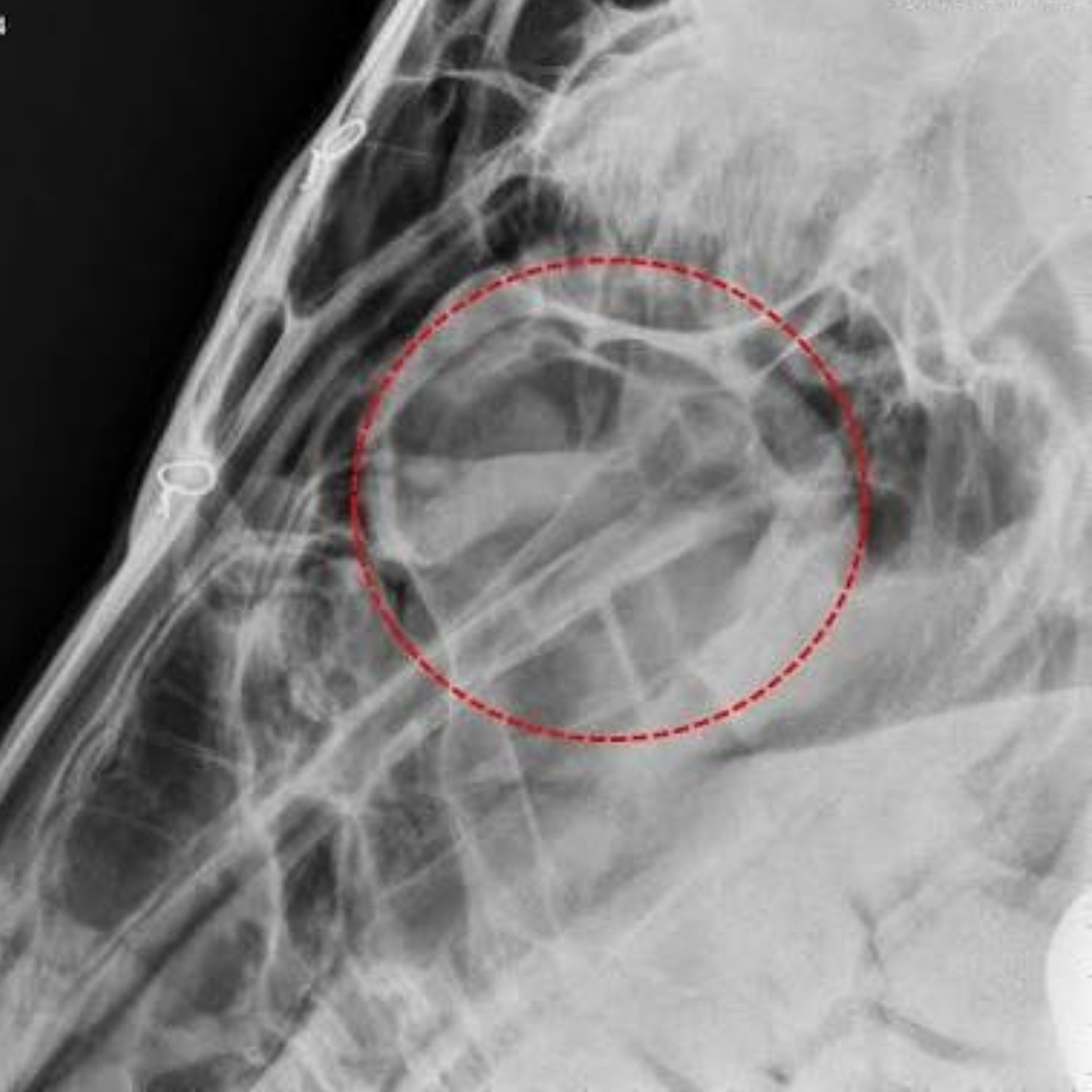 For the doctors at Fourways Equine Clinic to determine the cause of the facial swelling and respiratory noises, they took radiographs of the horse’s skull. The radiographs revealed that the horse had developed a cyst in his caudal maxillary sinus. The growth of this cyst had resulted in a blockage which was preventing his interrelated parasnasal sinuses (air-filled spaces located within the bones of the skull) from draining. Horses can develop a maxillary sinus cyst for different reasons; however, they are more at risk of developing it if they have a history of bleeding in the upper airway or if they suffer from primary sinusitis.

Horses have complex, air-filled paranasal sinus cavities with seven paired paranasal sinuses. In younger horses, the maxillary sinus accommodates the “reserve” crowns of the last four cheek teeth and as the horse ages, so the sinus becomes progressively larger. Five of these sinus cavities drain through a communal opening into the nasal cavity. 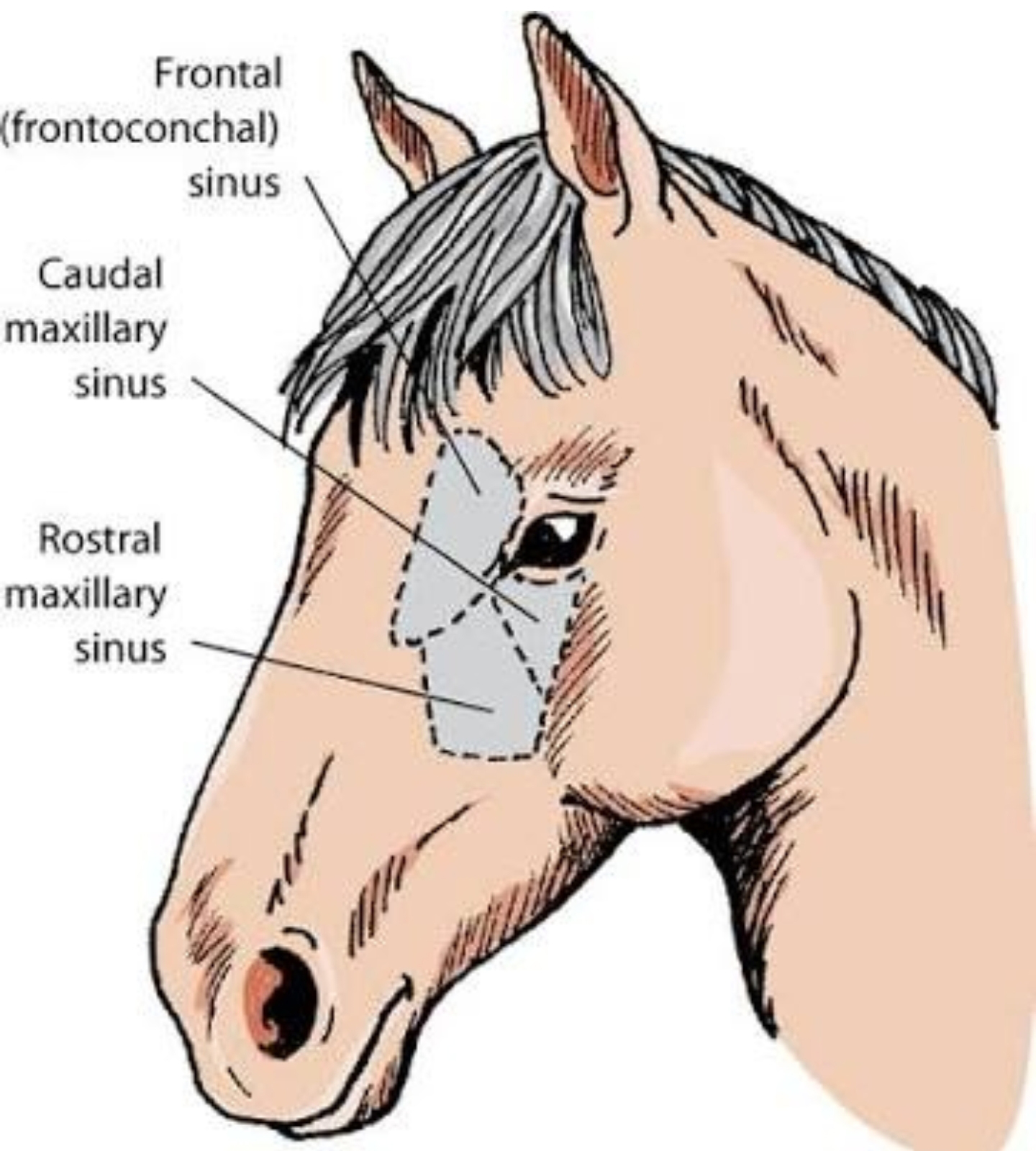 The clinical signs that the horse was experiencing were typical of horses with a maxillary sinus cyst---with the most common being nasal airway obstruction, facial swelling, and nasal discharge. Affected horses often make respiratory noises when exercising, as a result of the narrowing of the nasal passage, due to the cyst growth.

Further diagnostics, such as endoscopy of the upper airways can be performed which would show the narrowing of the nasal passages. These horses generally have radiographic changes as well, with acute sinusitis of the paranasal sinuses and occasional remodeling of the bone.

Why Early Diagnosis is Important

If a horse is suspected of having a maxillary sinus cyst, it is really important for the horse to be examined by a veterinarian. This is because without treatment, horses are more at risk of developing secondary sinusitis (which can be from something as simple as a tooth root abscess), and more sinister growths within the same area of the paranasal sinuses. Any additional growths that develop can have a detrimental effect on the horse’s prognosis for recovery and ability to return to their previous use.

Fourways Equine Clinic performed a specific type of surgical procedure that is typical for horses with a maxillary sinus cyst. Fortunately, the procedure is generally well tolerated by horses, allowing for it to be performed while the horse is standing---however under sedation with local analgesia. The surgical procedure involves a sinus trephination(drilling a round trephination hole) into the frontal sinus of the horse, using surgical tools.

Trephination is an invaluable diagnostic aid and, in this case, was also curative. A tissue sample of the cystic structure was taken and submitted for histopathology (microscopic examination of the tissue) to determine what it is and a sample for bacteriology was also collected- the reason being- to determine that if the horse required antibiotics, which would be the most suitable. Since Fourways Equine Clinic has an in-house laboratory, it provided them with the ability to obtain quicker results, which allowed the horse to begin treatment faster.

The cyst was lanced to facilitate drainage. The sinus cavity was flushed for a couple of days to remove all the residual mucoid (mucus) material and an endoscopy of the paranasal sinuses revealed no other abnormalities.

This gelding has since fully recovered and is back to his normal work routine!

Fourways Equine Clinic is one of the largest equine clinic in South Africa, and is located in the heart of horse country in Kyalami, Johannesburg in South Africa. The clinic was started in 1974 by Dr. George Frost and Dr. Crocky du Preez, and has grown over the years to a team of seven veterinary experts---Dr. Terry Casey and Dr. Aidan Glynn are the managing partners and are supported by Dr. Willemien Moraal, Dr. Jeanne De Villiers, Dr. Summer Maitland-Stuart, Dr. Adrienne Viljoen and Dr. Martin Schulman. They have received recognition for being a well-renowned and respected equine veterinary practice. The clinic is part of the Equine Care Hospital (Equicare) in Midrand, through which it offers 24/7 emergency treatment for horses. The facility has its own dedicated in-house laboratory and a CT Scanner.