Howie (short for Howard) is a 13-year-old gelding. Mollie has had Howie for 2 ½ years. He was originally from Colorado, and was shipped to Iowa when he was two years old, where he showed up until she purchased him in 2015. Mollie was looking for a horse to begin showing at breed shows. She had looked at many different horses but was having trouble finding one she really liked. One day, Mollie’s trainer showed her a video of Howie. At first, Mollie had no interest in him, then later changed her mind. When Mollie went to visit Howie, he was a bit out of shape from not being ridden in several months. However when Mollie rode him, Howie rode perfectly for her—she could see great potential as her show horse. After she got him, Howie rubbed his head against her---something that her old horse she had loved dearly always had done. She knew that instant that Howie was the horse for her.

Howie was turned out in a pasture full time with two mares, who all got along well together. The fencing was wooden three board fencing, with the middle board containing an additional nylon blend wire which was normally kept electrified.

At about 3:30 pm one July afternoon, Mollie came home from work and went to check on the horses. As she walked closer to the pasture, she noticed that Howie was inside of the run-in shelter and the other horses were about 100 feet from him grazing. She thought it seemed a little odd, and so she started walking over to see what might be wrong with Howie. To her horror, she came to find Howie’s hind leg all mangled up, later to find a portion of the nylon pasture fencing wire unattached from the fence and on the ground.

Howie’s injury (left photo) and the nylon blend wire Howie cut his leg on (right photo)
Mollie immediately called her primary veterinarian, Abraham’s Equine Clinic, to come out to the farm for an emergency farm call. When Dr. Abraham arrived at the farm, he examined Howie’s leg to assess the severity. He explained to Mollie that the laceration from the wire was actually quite deep—down to the bone. There was a small nitch on Howie’s cannon bone, but it will heal. What was of most concerning to Dr. Abraham was that the laceration also cut into the lower joint of his hock, which put him at risk for an infection in the joint. Dr. Abraham recommended that Howie be transported to the equine clinic which was 6 miles from Mollie’s farm. As Dr. Abraham administered some medication to help with the pain and initial antibiotics. As he wrapped Howie’s injured leg, Mollie’s dad went to hook up the horse trailer. Howie was loaded onto the trailer and transported to and checked in at Abraham’s Equine Clinic.

The following day, Mollie went to visit Howie at the equine clinic and spoke with Dr. Abraham about his health status. Howie was being given IV antibiotics 2-3 times a day and regional antibiotics. He would need to stay at the clinic on full time stall rest for at least another 2 weeks. His leg was kept bandaged the entire time and changed daily.

Some Good News for Howie

Three days later, Dr. Abraham had some good news to report about Howie’s wound. He told Mollie that everything looked great---no infection had set in and Howie was using his joint well. Howie was started on 5-10 minutes of hand walking once a day. Mollie was excited about being able to get to walk and graze Howie, who seemed to be tolerating everything quite well. 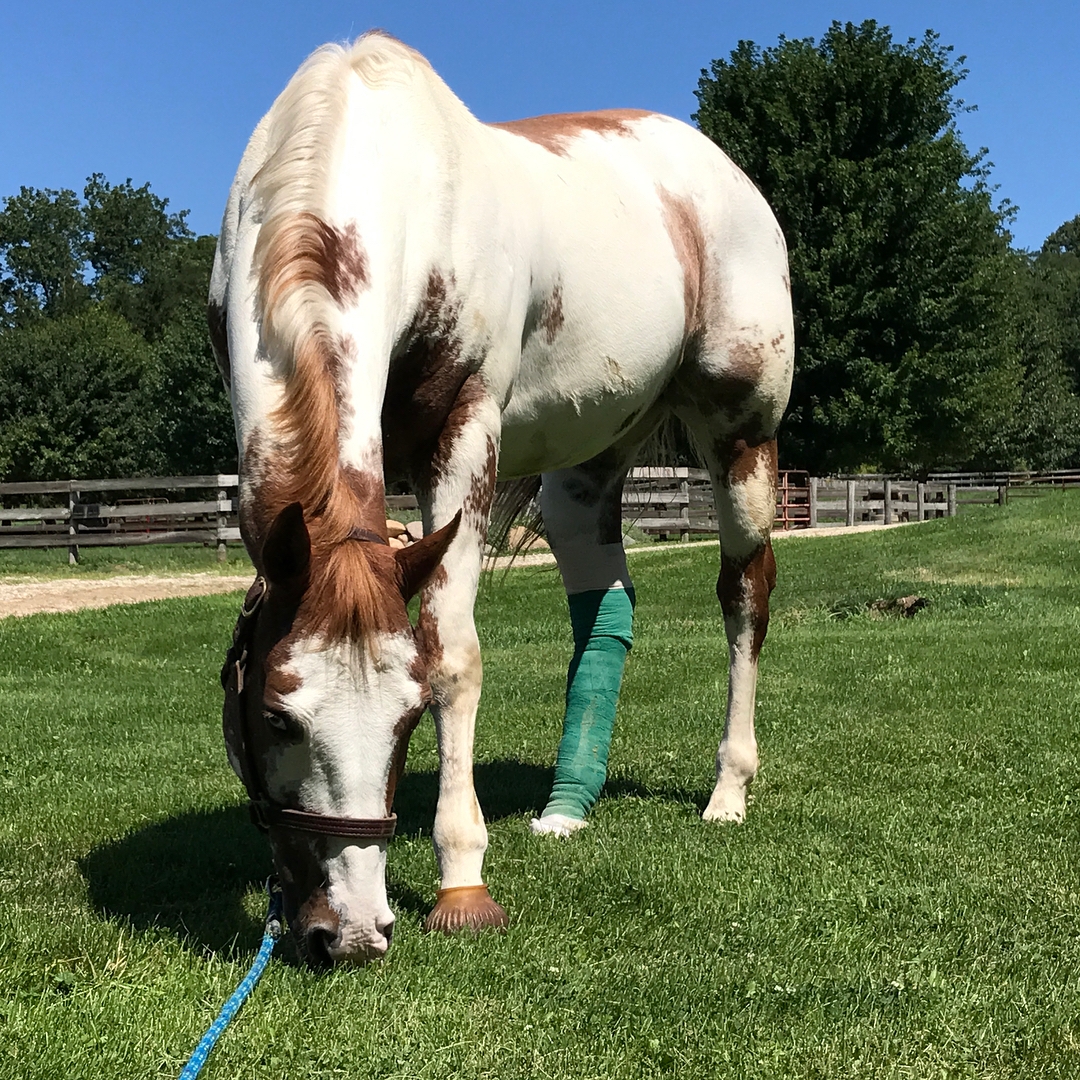 Howie hand grazing
For the next 13 days, Mollie continued visiting Howie at the clinic and taking him to graze while she was there. Finally by day 16, Howie could go back home. He would still need to remain on full time stall rest, and need daily hand walking and grazing. Mollie would also have to continue to bandage his injured leg every other day. Dr. Abraham showed her what she would need to do in order to properly bandage Howie’s leg.

Howie back at home, on stall rest (left photo) and Howie’s wound as of Aug 11 (right photo)
Two weeks after being discharged from the equine clinic [August 22nd], Mollie brought Howie to the vet clinic to check up on Howie’s injury and assess how his wound was healing. Everything looked great! Dr. Abraham recommended that Howie could start getting turned back outside full time. Mollie had to make sure to continue to bandage Howie’s leg, especially now that he was turned out in the pasture.

Howie's Wound Healing Timeline
Howie’s wound continued to heal nicely, the edges were starting to scab up and shrink in size. Unfortunately some proud flesh was also starting to form, which would need to be removed by Dr. Abraham on a later date. Mollie is quite happy to have Howie back on the farm, and Howie is happy to be able to get turned out in the pasture again!

About Howie and Mollie

Keep up with Howie and Mollie by following them on Instagram @blacks.n.bays

Abraham’s Equine Clinic sits on 29 acres, in southeastern Cedar Rapids, Iowa. The hospital houses an in-house laboratory, radiology suite, endoscopy, surgery suite, and reproductive center. The clinic has six separate barns which include a total of 48 stalls, including the intensive care and isolation barn. Additional, the clinic has 12 paddocks and 6 rolling pastures for turnout.