Jaska (show name MSK Full of Joy) is a 6 year-old Finnish warmblood gelding who lives in Southern Finland. He is co-owned by 21 year amateur rider, Heidi Alanko and her mom who board him at the Aulanko Riding School in Hämeenlinna, Finland.

They bought Jaska from Heidi’s trainer, Salla Varenti, when he was 4 years of age in December 2015. Salla had purchased him from breeder when he was 3 years old. She thought that Jaska would be a good horse for Heidi, and that they were well-suited for one another. It was the first time Heidi owned a younger horse, however she and her trainer were confident she could handle it. She had previously been showing her 17 year old Dutch warmblood gelding in junior and low amateur jumper classes with great success.

During the past two years, Heidi and Jaska have since bonded; so much so, Heidi considers him her best friend. Jaska is as his name suggests—always ‘Full of Joy’. He is a very curious and social horse, who makes friends with every living creature that comes near him. When turned out in the pasture with his pasture buddy, they will play and run around all day, except whenever he sees Heidi, he’ll come running up to the gate and start neighing to greet her!

Heidi first realized that something was off about Jaska at the end of January 2017. One afternoon, Heidi noticed Jaska’s left eye had a slight grey hue to it (indicating corneal edema). However, Jaska didn’t appear to be in any pain or discomfort, as he wasn’t trying to rub his eye on anything and there was no ocular discharge.

Heidi asked her trainer, Salla if she would come over to have a look. Salla recommended that Heidi call a veterinarian out to have a look at the eye ASAP, since she was well aware the seriousness of eye issues in horses. Heidi called and made an emergency appointment with her local veterinarian that same day.

Upon arrival, the veterinarian examined Jaska’s eye and confirmed the presence of mild corneal edema and corneal neovascularization (abnormal blood vessel growth in the cornea), coming from the front corner of his eye. They performed a fluorescein dye test on the eye which came back negative---meaning there wasn’t any foreign objects detected in the eye or damage to the cornea. The vet prescribed Jaska an antibiotic cortisone gel (Terra-Cortil-P) for Heidi to administer into Jaska’s eye twice a day. If there was no signs of improvement in Jaska’s eye after 3 days, she advised Heidi to call and let her know. 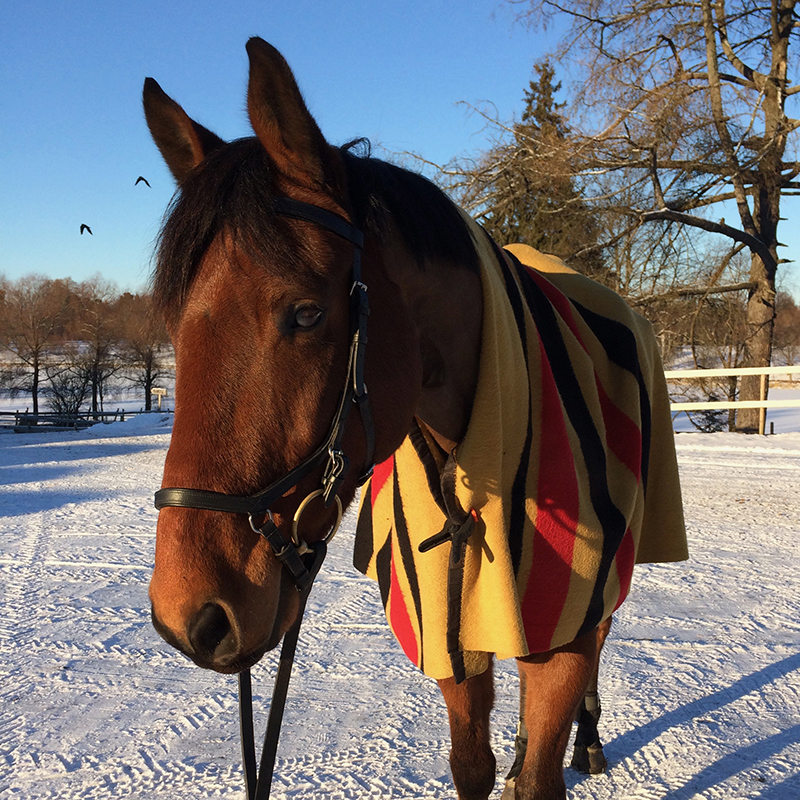 Jaska 5 days after he was first examined by his local veterinarian.
After 3 days of administering the drops into Jaska’s eye with no signs of improvement, Heidi’s local veterinarian referred Jaska to the University Equine Teaching Hospital in Viikki, Helsinki. Upon arrival, a resident veterinarian in training recorded Jaska’s vitals and asked Heidi questions about his history and previous treatment he received. Jaska still showed no evidence of pain in the eye, or that he had any vision loss. Jaska was taken into the hospital’s examination room for a comprehensive ophthalmic examination.

The room was actually full of people, because the veterinarian who was leading the examination was concurrently teaching several veterinary students and residents at the same time. Jaska was administered sedatives followed by having several tests performed on his eyes as part of the exam, in bright light and a darkened room. 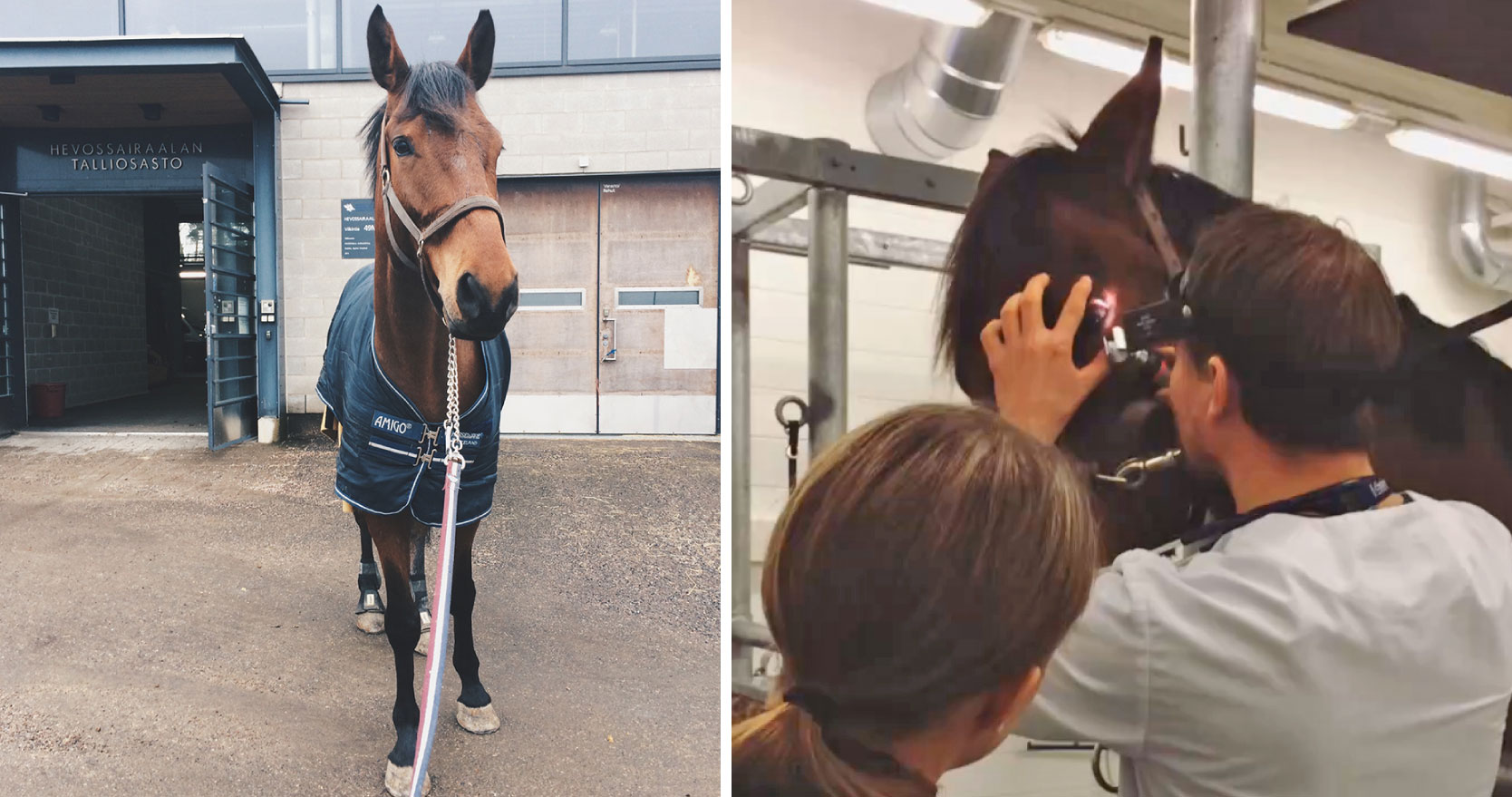 Jaska outside the University Hospital (left photo) and during his eye examination (right photo)
They documented the general appearance of the eye—the conjunctiva, cornea, pupil, iris, posterior segment, anterior chamber, and whether there was any discharge. Everything was normal except that the “lower half of the cornea has moderate swelling. The very low border of the cornea however clear. Newly formed blood vessels to the 5-7 o’clock, reaching to mid-way of the pupil and to the upper part of the swollen area.”

The intraocular pressure (IOP) in both of Jaska’s eyes were within normal limits. The fluorescein dye test came back negative. 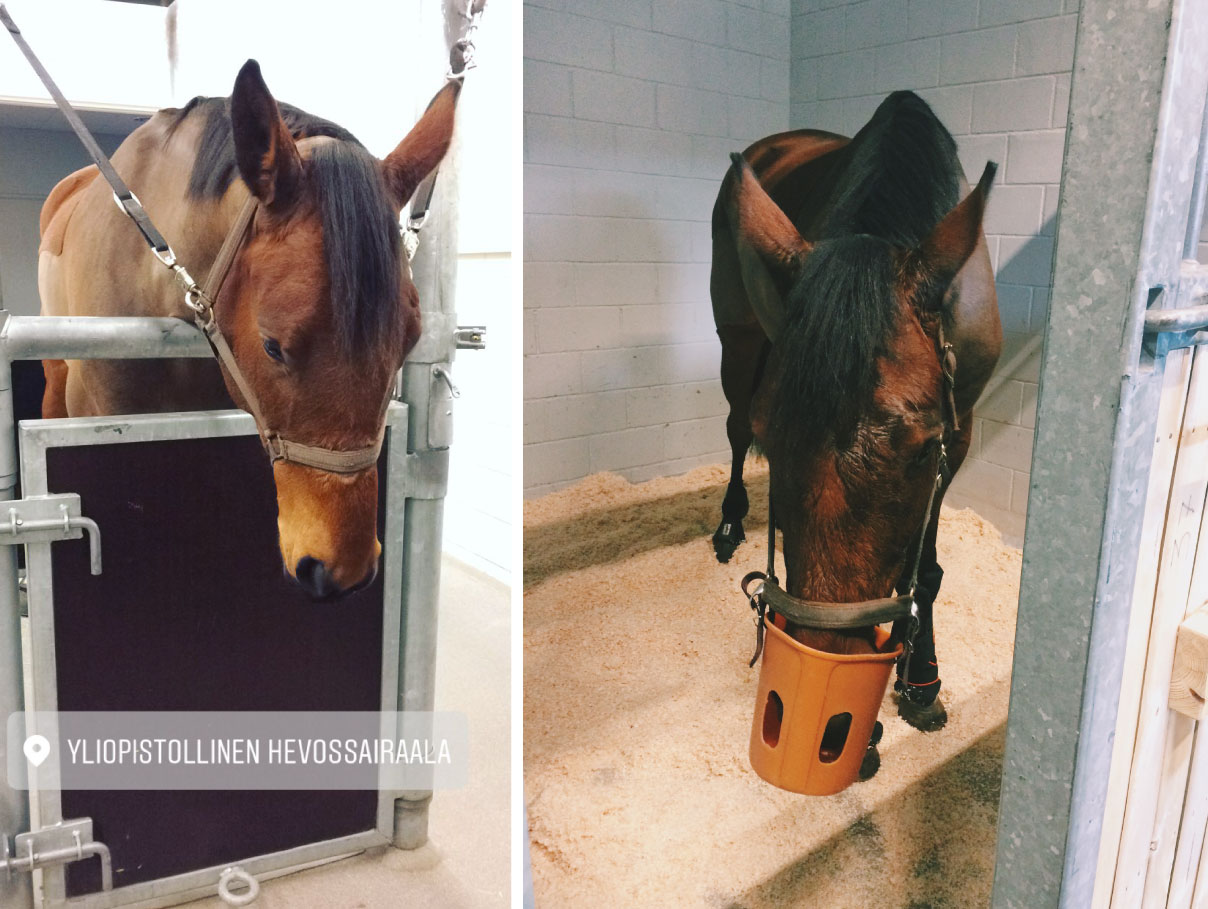 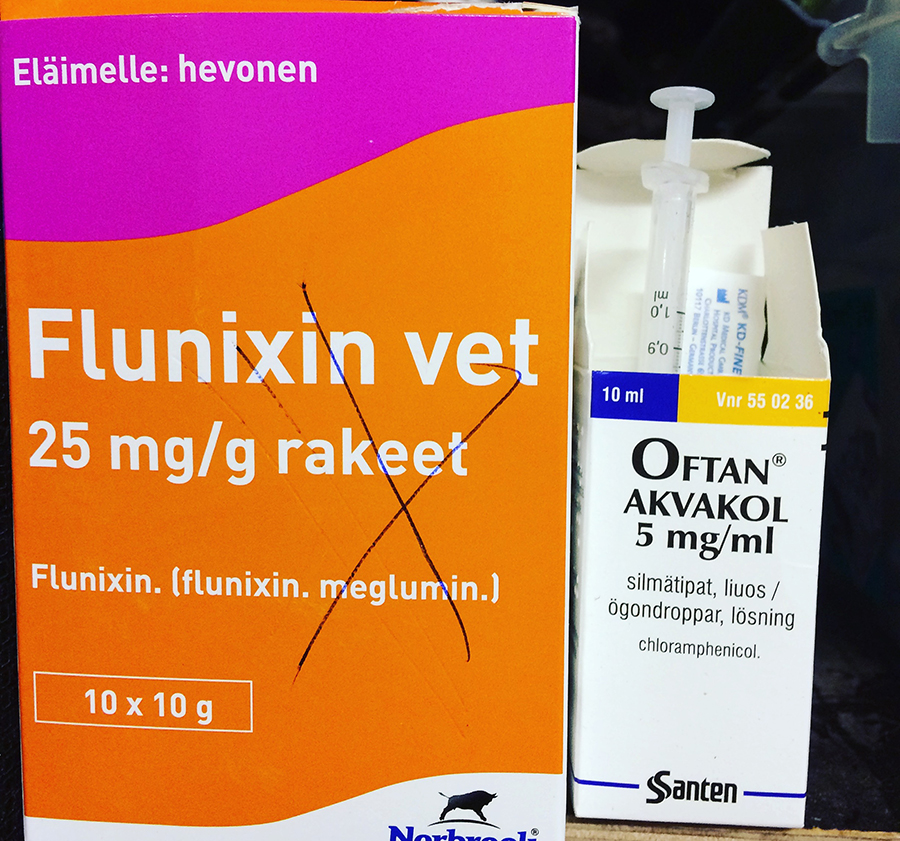 Administering Jaska’s eye drops was initially a bit difficult. At first, Heidi needed somebody to help her each time she administered the drops in Jaska’s eye. Since the drops had to get under his eyelid, Heidi needed to use her fingers to pull his eyelid aside, and then squirt the drops in, while keeping Jaska perfectly still. Every time he shook his head she’d miss. She found that by holding one of his ears tightly helped a little to keep him calm. Heidi also made sure to always give Jaska a treat and praise him right after administering the drops---which after two weeks or so, really helped.

Once Jaska recognized the routine and knew he would get a treat afterwards, he started automatically lowering his head for Heidi and remained still while she squirted the drops under his eyelid. He made it so easy in fact, that Heidi no longer needed anyone to assist her. By the end, Heidi could just walk out to Jaska’s pasture with a full syringe of the medication (and pocket of treats) and administer it in his eye without even putting a halter on!

After 9 days of treatment, Jaska returned to the University for a Progress Exam with Dr. Elina Pietilä, a European Specialist in Veterinary Ophthalmology (who was out of town at the time of Jaska’s initial visit to the University Hospital). She examined both of Jaska’s eyes thoroughly, and was joined by the veterinarian who performed Jaska’s exam at their first visit. The corneal edema (swelling) and corneal neovascularization (abnormal blood vessels) had decreased since his last visit---the treatment was working!

Jaska was to continue receiving the cortisone drops, at the same dosage and frequency for an additional week. After which, he would start slowly tapering off; the frequency reduced to 2 times a day for 3 weeks before another a second progress exam with Dr. Pietilä at the University hospital.

During Jaska’s eye exam on his second progress exam, Dr. Pietilä was happy to report that the blood vessels had almost completely dried out the corneal adema had disappeared. However, there was some bad news. During her exam, Dr. Pietilä discovered a tiny piece of hay in Jaska’s left eye. The fluorescein dye test had come back positive---meaning that the hay had caused some minor damage to the eye.

In response to this new development, Dr. Pietilä advised Heidi to stop administering the topical cortisone drops in Jaska’s eye for a couple days. Jaska was also given another round of treatment with topical antibiotics (Oftan Akvakol 5 mg/ml).

Jaska’s eye healed well without any further complications. However, a small (3mm x 8mm) corneal opacity or scar will always remain---which appears as a slight grey spot in the eye if you look close enough. Thankfully, it doesn’t have any impact on his vision!

What Heidi has Learned from her Experience

“Eye related diseases are always a serious matter and you should check your horse’s eyes frequently to see if there is anything abnormal going on. In Jaska’s case, the biggest abnormal vein had been growing already for a while before we even could see the swelling on his eye. The faster the keratitis gets treated, the sooner the treatment should be over. Dr. Pietilä told us that when a horse gets the keratitis for the first time, it should be treated aggressively and for a little longer than what seems necessary – this could ensure that the horse doesn’t get the keratitis again! And yes, at least immune mediated keratitis (IMMK) can, and in most cases will, come back. It might return just once after 10 years of being keratitis-free, or each year (especially if it’s stress related, like for example when the horse comes back to work from the summer pasture and gets it). Because the reasons behind IMMK are still unknown, you shouldn’t be blaming yourself (or others) – it can happen to anyone’s horse! The best thing about IMMK is that it’s treatable and the treatment is reasonably cheap, because the only thing you need is the cortisone drops and it doesn’t even require expensive x-rays etc. to be taken at the vet clinic!”

“During our keratitis journey I learned more about horses’ eyes and the disease itself (I had never heard of it, the only eye-related disease I knew was the scary uveitis). Jaska learned first that trailering is terrifying, because it’ll take you to the clinic (and then later after a few trips to horse shows he forgot about it) and he also learned that he will get more treats if he lets me squirt stuff into his eye. I hope he never gets the disease again, but if he does, at least I know what it is and can act quickly to treat it.“

Elina Pietilä graduated from the Faculty of Veterinary Medicine, University of Helsinki in 1998. She has been an ECVO approved Eye Scheme Examiner since 2006 and a Diplomate of the European College of Veterinary Ophthalmologists (ECVO) since 2011. Most of her supervised training in an alternative route residency was done at the University of Zurich, Switzerland where she also developed a strong interest in equine ophthalmology. She was also trained at the Universities of Helsinki, Finland and Missouri, USA. Elina currently works as a clinical teacher in ophthalmology at the University of Helsinki. She is a member of the Finnish eye panel, chair of the Finnish Society of Veterinary Ophthalmology and member of the ECVO Education and Residency Committee. Her special interests include presumed inherited eye diseases and ocular surface disease in dogs and cats and equine ophthalmology, especially infectious and non-infectious corneal disease and ERU.