A New Lease On Life For Netty 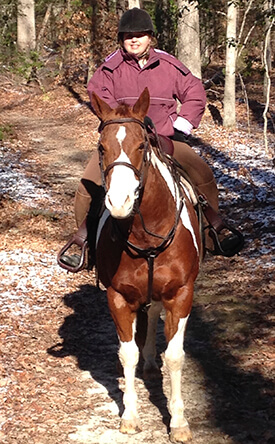 When Aimee Swenson began the search for a new trail horse, her bar was set high. It seemed no one could quite fill the horseshoes of her previous partner of 14 years, a retired mounted police horse named Bunky. “He was pretty much perfect," said Swanson. "After losing him at age 28, I spent a whole year looking for my next horse – one that I could enjoy as much as my first.”

Then she found Netty.

Swenson made the trip from Ashland, VA to Ocean City, MD to meet the chestnut and white Paint, and he quickly won her over with his inquisitive, friendly disposition. It wasn’t long before Netty came home with her, and they explored many trails together over the next several years. While a smart and careful riding partner, it is the way Netty acts with Swenson out of the saddle that she truly adores. “He is a bit of the youngest child. When you ask him to do something, he always asks ‘why?’” laughs Swenson. “But I wanted a horse with personality and I got just that. He really loves people and attention and is just a great boy.”

The Pastern: A Sore Subject

The one challenge Swenson had with Netty concerned pastern arthritis in his lower left front leg, which grew increasingly uncomfortable for the Paint over time. Eventually joint injections were administered and seemed to successfully manage his pain for almost a year. Then, in March of 2016, even the injections began proving ineffective, not even lasting 30 days. Swenson and her long-time vet, Dr. Douglas Daniels of Virginia Equine PLLC, had to come up with a new plan. 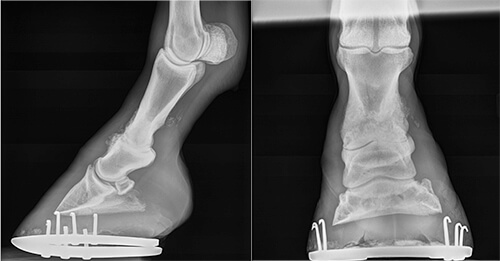 Radiographs show Netty's pastern has not fused
“My choices basically came down to two options: we could let Mother Nature take its course, knowing that the joint would eventually fuse on its own in maybe six to 12 months; or we could have the joint surgically fused with a pastern arthrodesis.” Unfortunately, it can be hard to predict exactly how much time it will take for a joint to naturally fuse, and when Daniels took updated radiographs of Netty’s pastern in late August, there were still very little signs of fusion.

By then Swenson was managing Netty’s comfort level with a combination of bute, Previcox, topical anti-inflammatories, chiropractic care, and daily icing, but the horse was still quite lame. “We x-rayed his other legs and feet since we were concerned those joints had started breaking down as well, but there were no signs of arthritis anywhere else,” said Swenson. “At that point I thought if we could fix this one joint, Netty could at least return to comfortable turnout. He had been very patient and I didn’t want to make him wait in pain any longer. I felt that at 16 he was young and healthy enough to invest in the surgery.”

The Surgery: Locking It In

Pastern arthrodesis has an approximately 70% prognosis for return to soundness, but Swenson knew she could only do the surgery once. She interviewed a number of surgeons, including several local to her area in Virginia, but ultimately made her decision after speaking with New Bolton Center’s Dr. Kyla Ortved, Assistant Professor of Large Animal Surgery. “I felt the most comfortable with how Dr. Ortved answered my questions, and I also knew that New Bolton Center has a fabulous reputation. I decided it was worth the trip.”

Swenson and Netty made the five-hour trek to New Bolton Center’s Kennett Square, PA campus in mid-September for the surgery. Walking Netty off the trailer, Swenson immediately felt at ease. “The facility was immaculate and the staff was very helpful in getting him settled in. I just felt a lot of confidence in everyone, really.”

Netty’s pastern arthrodesis was performed by Ortved via an open technique using inverted “T”- and “V”-shaped incisions made across the front of the pastern to access the joint and remove the damaged cartilage. A specialized three-hole locking compression plate was then placed with three transarticular screws across the face of the joint to stabilize it and support healing of the soft tissue around it. 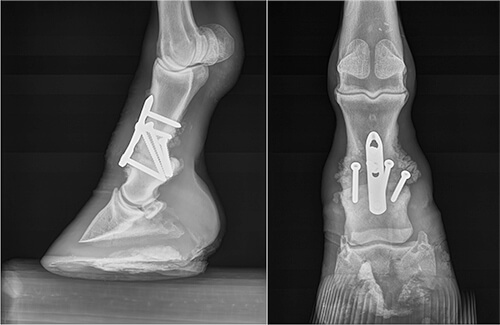 “This creates a much sturdier and more stable fixation, with less potential for movement,” explained Ortved. “In particular, the shorter three-hole locking compression plate implant, with holes that are perfectly positioned to place across the pastern joint, has really helped fine-tune the pastern arthrodesis surgery.” 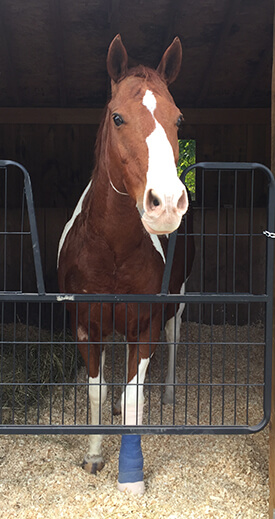 Netty rests comfortably at Swenson's home
The surgery went according to plan, and the change in Netty’s pain level was almost immediate. “Dr. Ortved told me that when he woke up from the anesthesia and walked back to his stall, he already looked more comfortable than before surgery,” said Swenson.

Netty’s left front leg was placed in a cast to help keep the joint stable while the incision healed. He stayed under New Bolton Center’s care for the next two weeks and continued to remain very comfortable on the limb. “The whole time Netty was there, they were very communicative about his progress,” said Swenson. “Dr. Ortved sent me a text every day.”

Once the cast was removed, post-operative radiographs were taken, which confirmed excellent placement of the implant. “At that point he was still recovering quite well, so we sent him home with Aimee to continue his rehab there,” said Ortved.

Netty transitioned to at-home care smoothly, and within two weeks, no longer needed bute or Previcox to be comfortable. Radiographs were taken at three months and six months post-op, and both Ortved and Daniels were very happy with the progress. Throughout his rehab, Netty remained an amenable patient, and returned to turnout with his pasture mate in March 2017.

Netty continues to progress in soundness and is almost fully sound at the walk and trot today. “He is not 100% sound all of the time quite yet, but he is so much more comfortable and can happily canter around the field when he wants. My vet said he has no reason to doubt that he will continue to improve over the next several months,” said Swenson. 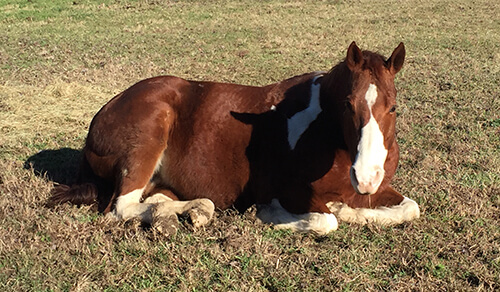 “Both Dr. Daniels and Dr. Ortved did a good job of managing my expectations following surgery, and I’m already so happy with the outcome. If he recovers to full soundness, I might get on him again, or I might not. My reason for doing this surgery was to do what was fair for him. With his pain level at the time, my only other option would have been to put him down. That just didn’t feel like the right decision. Now he can hopefully live 10 more years comfortably and doing what he wants.”

Swenson credited Netty’s success to her local vet and to the excellent care provided by the New Bolton Center team. "The surgery saved his life. I do believe that."


From “A New Lease on Life for Netty”, by Carla Nieser, June 2017, Penn Vet Extra, University of Pennsylvania School of Veterinary Medicine. Reprinted with permission. http://www.vet.upenn.edu/about/press-room/publications/penn-vet-extra/penn-vet-extra-june-2017/a-new-lease-on-life-for-netty

Dr. Ortved is an Assistant Professor of Large Animal Surgery at the University of Pennsylvania School of Veterinary Medicine. She is a board-certified surgeon who specializes in equine orthopedic surgery, fracture repair, arthroscopy, tenoscopy, and regenerative medicine in horses.

Virginia Equine, PLLC is conveniently located in Manakin-Sabot serving areas of Goochland, Powhatan, Midlothian, Chesterfield, Louisa, Hanover, Henrico, Williamsburg and the Northern Neck. They are primarily an ambulatory veterinary practice with a clinic for haul in appointments and medical care. The practice has four veterinarians that work full time.

Dr. Daniels is the practice owner at Virginia Equine, PLLC. Besides general equine practice, he has a special interest in the treatment of racehorses and is a current director on the board of the Virginia Horsemen's Benevolent Protection Association. He also serves as a official veterinarian for the National Steeplechase Association and the Virginia Racing Commission.