Snapper is a 22-year old Missouri Fox Trotter gelding who has been Bridget’s horse almost her entire life—she even saw him being born on her family’s farm. He was Bridget’s best friend and constant companion while she was growing up. Being a gaited horse, Snapper and Bridget mainly competed in breed specific horse shows, although covering a variety of disciplines—including trail, jumping, barrel racing, and gaited pleasure classes. As Bridget and Snapper both grew older, they stopped showing and instead enjoyed pleasure riding on trails with friends. He was also a great lesson horse for younger riders when Bridget taught riding lessons.

Snapper as a foal (left), competing w/ Bridget (middle), and as a lesson horse (right)

June of 2013, Snapper turned up lame in his right forelimb. Bridget discovered that he had developed a foot abscess in his right front foot. Bridget treated it with stall rest and frequent Epsom salt soakings until it healed. Over the next year, Snapper developed 4 more abscesses in the same location, in the same foot. Each time, Bridget called a local veterinarian out to look at the foot, who would diagnosis it as an abscess. One time radiographs were taken of Snapper’s foot, and the vet still diagnosed it as simply an abscess.

Bridget was beyond frustrated, because she knew that there had to be a reason Snapper was getting so many abscesses, however none of the local vets were able to explain why. The usual response she got was that “it’s been an unusually bad year for abscesses.” She decided to seek expertise elsewhere---and made an appointment for Snapper at the University of Georgia’s (UGA) Large Animal Hospital.

Upon arrival at UGA, Bridget and Snapper were promptly greeted by one of the veterinary interns who started asking questions about Snapper’s history. A few moments later, the doctor approached and introduced himself as the veterinarian who would be in charge of Snapper’s case. 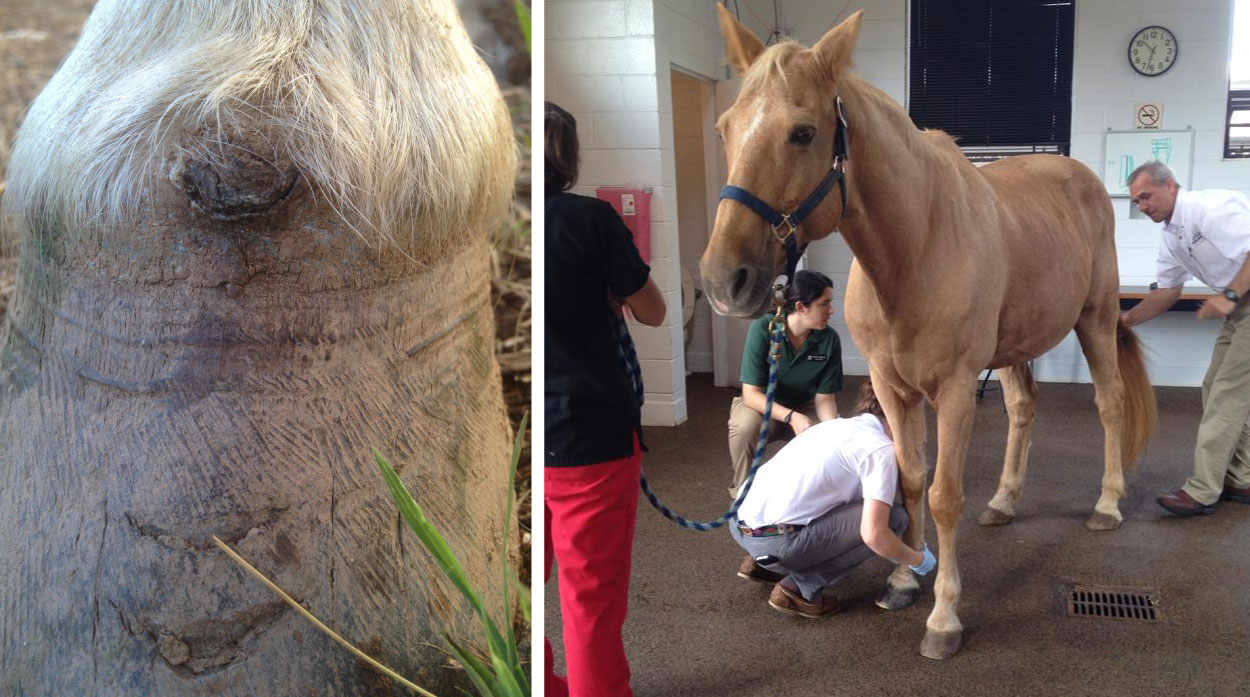 Radiographs were taken of both of Snapper’s front feet, at multiple angles. After obtaining the images they wanted, Snapper was brought into a temporary stall and the intern brought Bridget into the radiograph room so that the doctor could go over their findings with her.

As a result of the deterioration of the coffin bone, Snapper would never again be 100% sound. The doctor recommended surgery to remove the keratoma and debride the abscess. The surgery would involve cutting a square hole into the front of Snapper’s hoof, so that they could extract the mass from his foot. Post-surgical recovery would be long as it would take up to a year for the hoof to grow back. Bridget chose to proceed with the surgery.

Surgery: Extraction of the Keratoma

Two weeks later, Snapper was brought to UGA for surgery. The procedure was performed while Snapper was standing under sedation. The doctor first removed an area of the outer hoof wall (1.5” x 1.5” square), to allow access to the tumor, which was located between the hoof wall and the deeper sensitive tissues. Bleeding was controlled with the use of a tourniquet, and the keratoma was carefully separated and removed from the hoof.

After the surgery, Snapper was hospitalized overnight for observation in case of any post-surgical complications. He was given antibiotics (penicillin) and an anti-inflammatory (bute) to help with the pain. The next day, Snapper was discharged from the hospital with detailed post-surgical care instructions for Bridget.

Holes in Snapper’s right front hoof wall (left photo) and on the bottom sole of his foot (right photo) from the surgery.

Post-surgical care of Snapper’s foot was a time-consuming process which lasted over several months, and involved stall rest, frequent bandage changes, and administering medication. It was important that Snapper’s right hoof was kept clean and dry while the hole in the hoof wall healed, for the opening in his foot made him more vulnerable to getting a bone infection. Also, since Snapper was at risk of left front support-limb laminitis, Bridget had to monitor him daily for any signs of discomfort or lameness on his left front foot.

Bandage Management: The doctors showed Bridget exactly how to bandage it before she left the hospital. She kept his foot bandaged at all times, changing it every 2 days for the first week and then every 2 to 3 days until a layer of horn formed over the hole. Bandaging Snapper’s foot was a 9-step process, which consisted of the following: 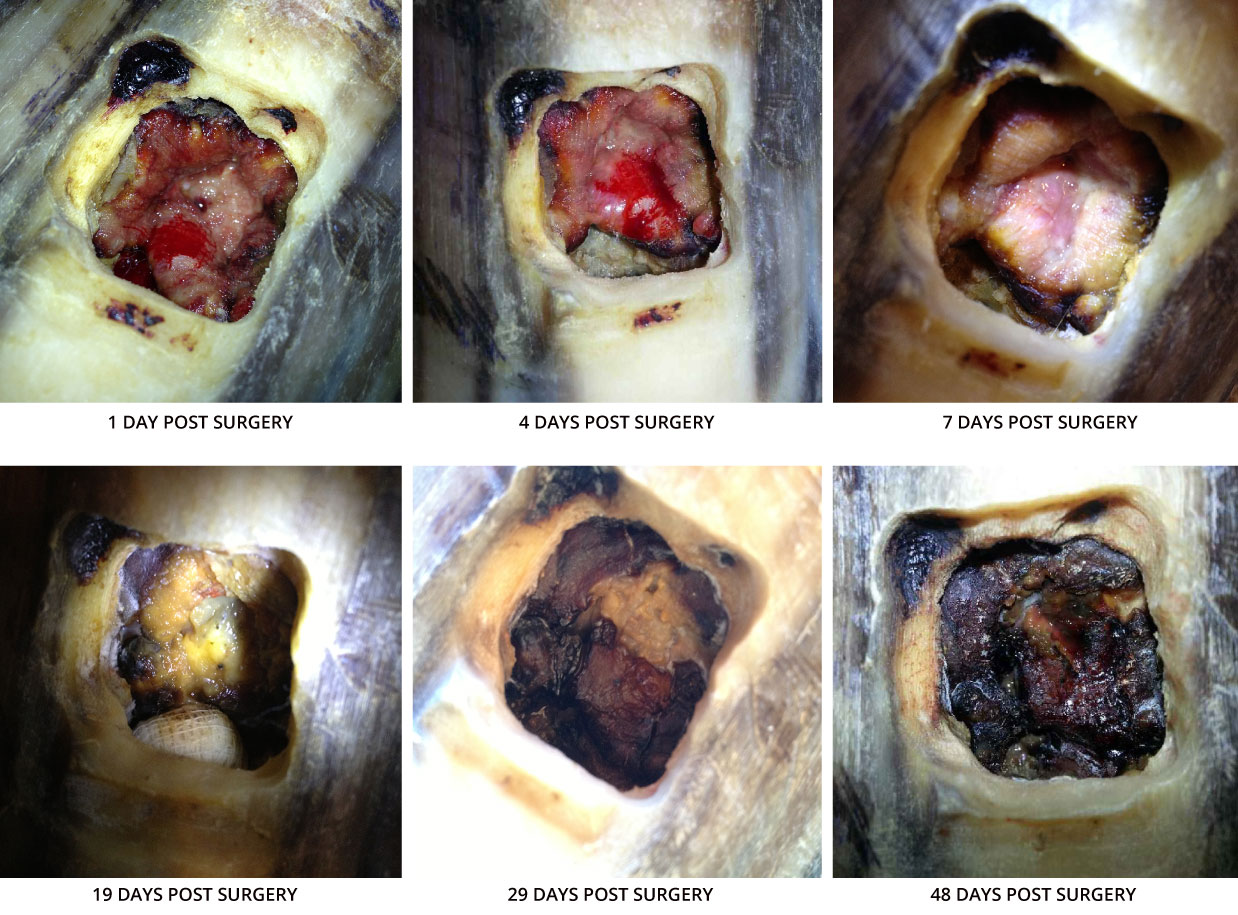 Stall Rest: Snapper was kept on strict stall rest for the first two weeks following the surgery. While in his stall, Bridget had to frequently clean his stall and keep a deep layer of clean and dry shavings for him to stand one. After two weeks, as long as the paddock was dry and there was no chance of rain, Snapper was able to go out in a small paddock for a couple hours a day. His foot had to remain bandaged.

Four weeks post-surgery, Bridget brought Snapper back to UGA for a follow-up appointment. Upon arrival, the UGA veterinary team greeted them and proceeded to examine his foot. They removed Snapper’s bandage and thoroughly cleaned the holes in his right foot with chlorhexidine, and rinsed with sterile saline. To help Snapper’s foot heal faster, the doctor debrided a small amount of soft yellow tissue to expose healthy, bleeding tissue. The doctors were happy with how Snapper’s foot was healing. They then repacked and bandaged Snapper’s foot and sent him home. 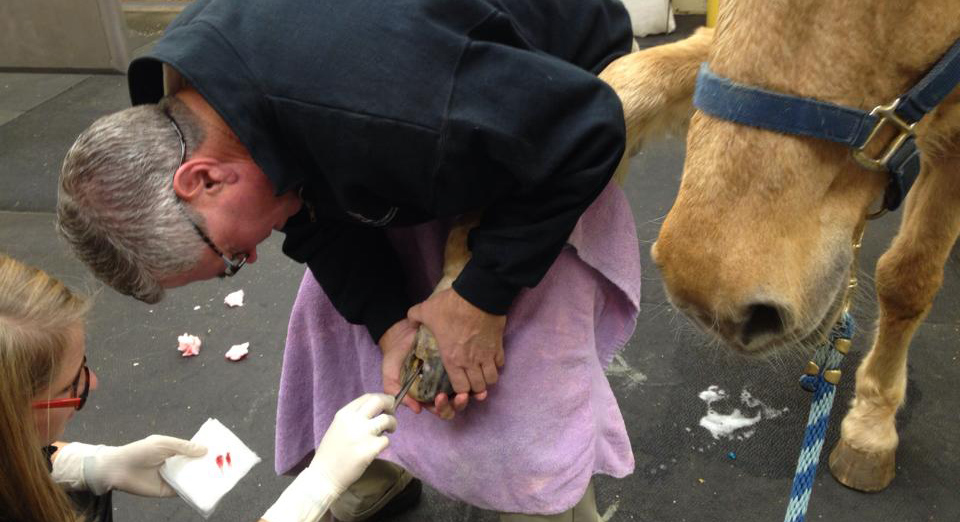 Snapper’s 4-week follow up visit at UGA
Once a healthy layer of horn formed over the hole, which took an additional four weeks, Bridget was given the okay by the doctor to allow Snapper’s foot to be left un-bandaged. Since the tissue over the hole was hard enough to block any debris---as long as it didn’t get wet. This meant that Snapper was still on controlled paddock turnout, and days where it looked like rain he had to stay inside.

It took about 8 months for his hoof to fully grow back. Bridget brought him back to UGA at this time for a follow up exam. The physical exam showed that he had small area of white line disease in his right foot, in the area of the where the hoof had grown out.

Snapper’s lameness exam (left photo) and resting (right photo) at his 8 month follow up vet appointment at UGA
During the lameness exam, Snapper was moderately lame in both of his hindlimbs and on his right front foot (grade 3 of 5). Radiographs were taken of both of Snapper’s front feet, which revealed that his left foot had developed mild ossification of the medial collateral cartilage and the right foot had ossification of both collateral cartilages, as well as mild chronic rotational laminitis.

Comparison of Snapper’s right foot before surgery (left image) and 8 months after surgery (right image)
In order to help make Snapper more comfortable, due to slight rotation of his pedal bone, the doctor recommended that Snapper’s farrier use the radiographs as guidelines to help move the break over point backwards. In order to do so, he suggested the farrier to continue to shorten Snapper’s toe while concurrently raising the heel height. Being an older horse, Snapper also suffered from osteoarthritis, which is what was causing the hindlimb lameness. The doctor recommended different medications to help make Snapper more comfortable during retirement.

Bridget’s Reflections on the Experience

“UGA has an exemplary large animal clinic and team and we could not be happier with our experience there. Between our horrible colic situation and then the keratoma I would hands down recommend them to anyone. Although abscesses are common, it is not common for them to reoccur as often as Snapper's did. Something may be seriously wrong if they keep getting constant abscesses and it needs to be addressed ASAP before irreversible damage can be done. When you take your horse to the vet to get a diagnosis and you keep getting the same answer then keep moving around to other vets, and seek a specialist until you find a better answer. In the medical field not all conditions are known to all veterinarians or doctors and it is important to get a second opinion. 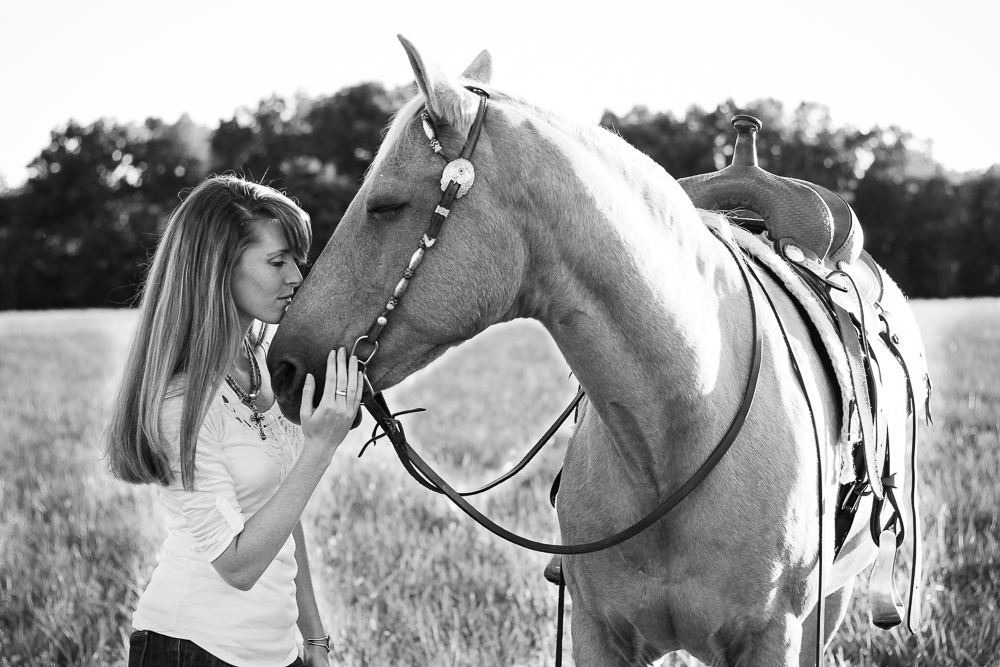 Bridget and Snapper
I’d like to emphasize just how amazing the team is at UGA. Our lead veterinarian, kept in close contact with me throughout the entire process, to make sure that Snapper was healing properly. Pictures were sent every two to three days to him and responses were promptly returned. Any questions or hesitations were confidently answered and check-up appointments were scheduled anytime that I brought up a concern. He freely gave his personal phone number to us to reach out to him if there were any problems or concerns. Between teaching, completing his typical veterinarian responsibilities and going on work trips it is amazing that he was able to outdo any other veterinarian I have worked with before. He was extremely personable, very caring and a huge help. And of course the staff at UGA were all absolutely amazing. Questions were always answered in a kind and helpful manner. And my horse told me they gave him a few extra nibbles of grain ;) Words cannot explain how grateful I am to the team there. I would absolutely be a spokesperson for them in a heartbeat.”

Wild Hound Outfitters is a boutique pet product business which sells unique and beautiful leather dog collars and other handcrafted products for dogs and their owners. Bridget and Trevor Tuckey founded the business in 2013, where it was originally a small Etsy shop named J&B Custom Leather which originally focused primarily on dog collars. Since then, they have expanded their business and sell a wide variety of products through their website, although they still also operate through Etsy.


About the University of Georgia

The University of Georgia (UGA) Veterinary Teaching Hospital, located in Athens, Georgia, handles more than 25,000 cases of small and large animal visits each year and offers 25+ specialty services, including a 24-hour emergency service. Their hospital staff consists of board-certified specialists, resident veterinarians and interns, veterinary students, and technical staff. The hospital offers brand new, state-of-the-art facilities and top-of-the-line equipment such as a CT Scanner, MRI, and a linear accelerator. The campus where the Hospital is located is referred to as the Veterinary Medical Center. It includes the main Hospital, a covered equine performance arena, a building for the Hospital’s ambulatory services, and an education building for teaching third-year veterinary students.