Stig is a three-year-old Hanoverian gelding who Jill purchased while he was still in-utero in 2014. He was born June 10, 2014. Jill plans to compete in Hunter/Jumpers with Stig. Following two months of professional training in April 2017, Stig was relocated to a small boarding stable near Jill, where he was turned out in a pasture with three other geldings.

The Day of Stig’s Injury

Late afternoon on June 30th, Jill received a call from the owner of the stable where Stig was kept. Somehow, while Stig was turned out in the pasture, he managed to get his right hindlimb caught in the electric fence wire. In the process, he tore open his leg. Since nobody at the stable actually witnessed Stig’s accident, it wasn’t clear exactly what happened. However, Jill suspects the following scenario: Stig was grazing near the electric fence and started kicking out to get a fly off. While kicking out, he managed to get his leg wrapped around the electrified wire. The shock from the wire would have caused him to struggle even harder, causing the wire to dig even further into his leg. Thankfully, since there were people at the barn during the incident, they were able to tend to it immediately. Both Jill and Dr. Stephanie Whalen from Troy Veterinary Services arrived at the stable within the hour.

Upon Dr. Whalen arrival, she sedated Stig and proceeded to clean and debride the wound. Although the wound was quite severe, it wasn’t was bad as it could have been---for the laceration just missed a major artery. Thankfully Stig did not sever any tendons or ligaments. To evaluate whether the laceration communicated with the lower hock joints, Dr. Whalen injected saline solution to ensure it didn't seep out. 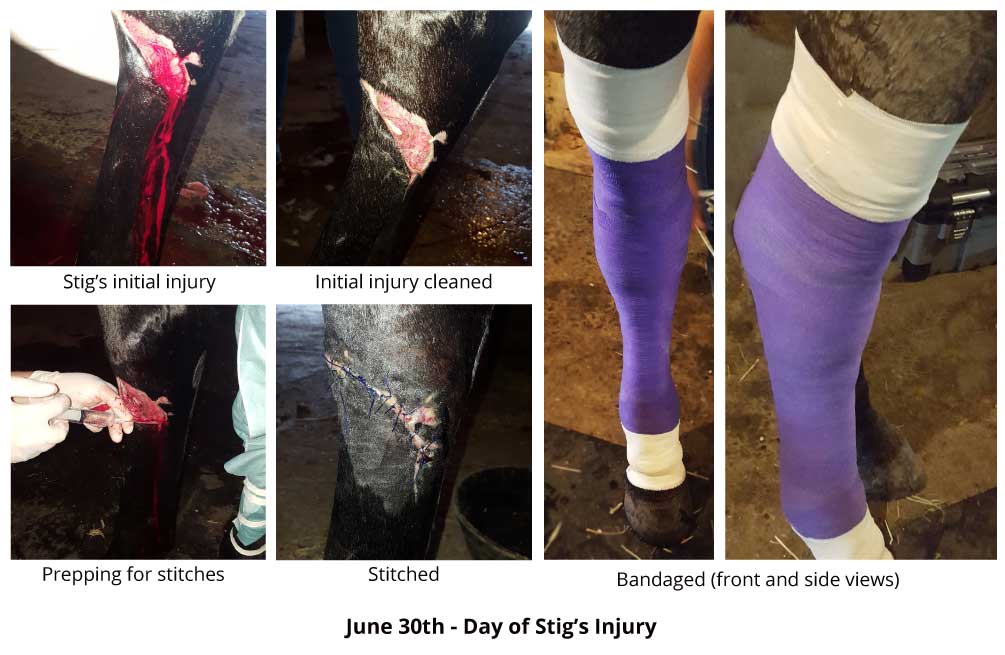 Before leaving the barn, Dr. Whalen instructed Jill to perform the following for Stig’s injury: