An Affair Of The Heart

It had been several weeks since Tiffany, a seven-year-old Percheron draft horse mare, had been able to go back to work.

A wheel horse for a six-horse-hitch driving team, Tiffany helps to move a three-and-a-half-ton hitch wagon in tandem with her teammates – a job that takes a lot of strength and stamina. But a previous surgery from January had left the mare on stall rest until she was able to be returned to work. 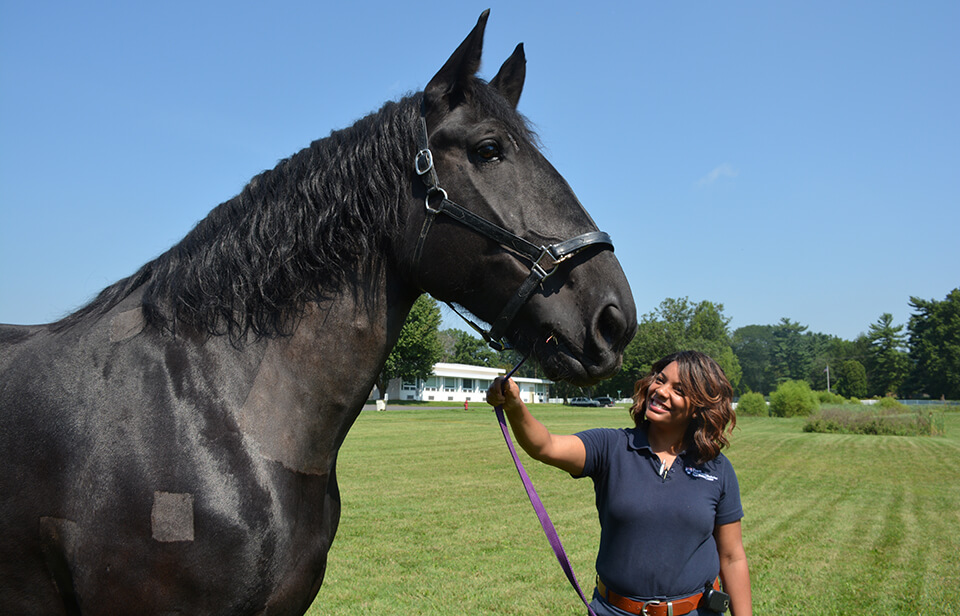 Rhonda Cole, Tiffany’s trainer at Pennwoods Percherons in Centre Hall, Pennsylvania, had been anticipating the opportunity to work with the mare, counting down the months until March arrived and the pair could resume her training regimen once again.

Finally, the day came – but a few strides into the warmup, it was clear something was very wrong.

“She trotted one lap and her head dropped,” said Cole. A normally spirited girl, the drastic change in Tiffany’s demeanor was immediately concerning.

“She’s always been one that you never had to worry about when it came to amounts of energy,” noted Cole. “She always has lots to give and leftover.”

A 24-hour continuous electrocardiogram (ECG) revealed the reason behind the poor performance the mare was able to muster – Tiffany’s heart was in atrial fibrillation (AFib), an electrical disorder causing it to beat in a rapid, irregular manner.

“If the atria are fibrillating, you’ve essentially lost the prime to the pump,” said Dr. Virginia Reef, New Bolton Center’s Chief of Imaging. “At rest that usually does not make any difference whatsoever, but during exercise it makes a big difference – priming the pump contributes 15 to 20 percent of cardiac output,” she explained.

There are two main options for treating a horse in AFib - through the administration of the drug Quinidine or by undergoing a transvenous electrical cardioversion (TVEC) procedure, where electrical leads placed in specific areas synchronize shocks to the heart, resetting it back into normal sinus rhythm

After a previous attempt to convert her through the pharmacological approach had failed, Tiffany arrived at New Bolton Center where Reef was on a mission to better understand the change in the mare’s heart.

“Tiffany came to us with a history of a high heart rate and acting agitated,” noted Reef. “We also know that she was in normal sinus rhythm at the time of her surgery in January – her AFib condition could have developed at any point since then.” 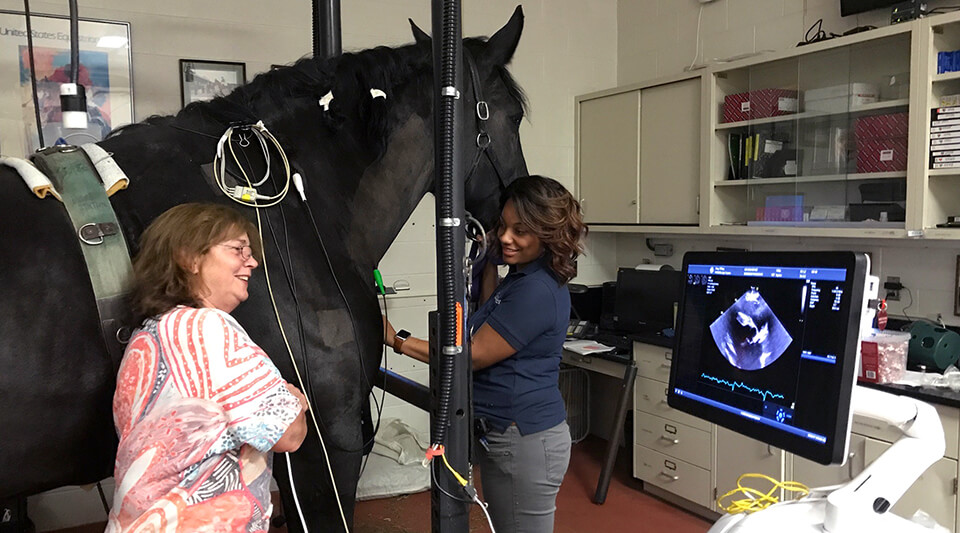 Excess levels of thyroid hormones can create heightened agitation in horses. After a workup revealed that Tiffany’s T3 levels were high, Reef discovered that one of the mare’s supplements contained kelp and shellfish, causing her thyroid gland to become overactive.

Since Tiffany may have been in AFib for as long as four months, the risk of her heart transitioning back to irregular rhythm after being converted was already high – as much of a 40-percent chance. The on-going hyperthyroidism only inflated those odds further.

“The longer AFib has been present, the more changes occur in the atrial muscle,” said Reef. “The heart remodels itself during that time, making it more likely for AFib to reoccur.”

The highest risk of a heart converting back to irregularity is immediately after successful procedure has been completed.

“It can happen very fast,” Reef explained. “Some horses have converted back to AFib before they’ve woken up out of anesthesia.”

Taking a hard look at the looming odds facing her patient, Reef decided the safest course of action was to send Tiffany home until the mare’s T3 levels could stabilize, making sure that the problem-causing supplement was permanently discontinued from her feeding routine.

In July, Tiffany returned to New Bolton with normalized levels, ready to begin her TVEC procedure. 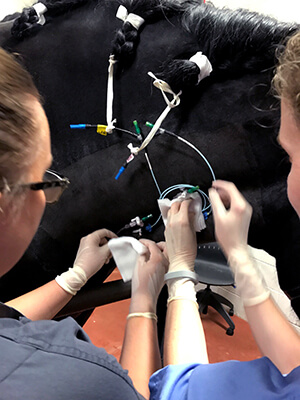 Standing at roughly 18 hands tall and weighing in at more than a ton, Tiffany presented unique challenges in getting clear pictures of the placement of her catheters.

Even in average-sized horses, seeing routine echocardiographic images clearly can be challenging. Clinicians typically track the number of centimeters the catheters have been inserted to ensure that they aren’t placed too far out in the lung or too close to the heart.

If the catheters are misplaced, the procedure runs the risk of not working. If placed in the wrong location with the heart, the procedure can be fatal.

“Getting an ideal position is imperative – and that was on us,” said Reef.

Using extra-long, specially-ordered catheters designed specifically for the procedure, Reef and her team were able to direct the first one through Tiffany’s right jugular vein and into the left branch of her pulmonary artery without much difficulty.

The catheter intended for the mare’s right atrium, however, was almost impossible to see.

Robots to the Rescue

With the capability of capturing equine anatomy in a way never before possible, Reef turned to the aid of New Bolton’s 4DDI EQUIMAGINE™ robots-controlled imaging system. Penn Vet is the first veterinary teaching hospital in the world using the system, the applications of which have aided both clinical and research efforts for animal and human medicine.

Churning out a whopping 25 frames-per-second, the fluoroscopic images produced by the robots are much like an X-ray “movie,” enabling clinicians to see continuous movement inside the patient’s body in real-time. 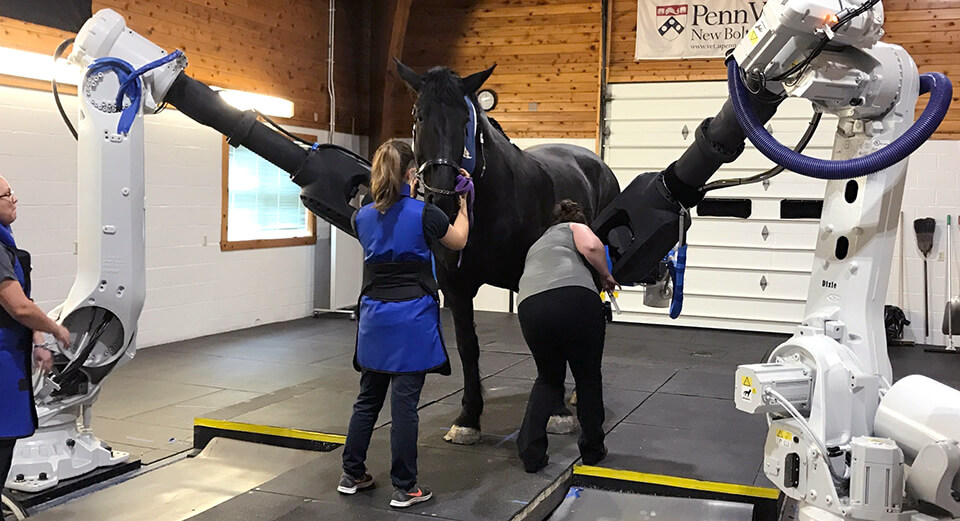 The Friday before the procedure, Dr. Kathryn Wulster, Clinical Assistant Professor of Diagnostic Imaging at New Bolton Center, and her team acclimated Tiffany to the robots and tested the fluoroscopy, fine tuning the system in preparation for the procedure.

In the more conventional approach, the horse would have to be fully anesthetized while the radiographs were taken to ensure that the placement of the catheters were acceptable.

With the real-time imaging feed on the screen in front of them, Reef and her team were able to precisely fine-tune the adjustment of Tiffany’s catheters, shaving off 45 minutes to an hour of the time Tiffany would need to be fully anesthetized.

“It was amazing. We could actually see the catheters beautifully, despite her size,” beamed Reef.

“I was so impressed with what the robots were able to help us achieve,” added Dr. Klaus Hopster, Clinical Assistant Professor of Large Animal Anesthesiology at New Bolton Center. “I have never seen such cool, highly detailed imaging before in my life – I was amazed.”

“For the first time, I had the ability to know that we had them exactly where we wanted them,” Reef noted.

With catheters situated, Tiffany was whisked off to anesthesia, where Hopster awaited with a new approach in mind.

Placing a horse in a recumbent position for a prolonged period of time places an immense amount of pressure on major muscle groups. Because of this, time is of the essence.

“For such a large horse, you want the recovery time to be as fast as possible,” explained Hopster. “But you also need the recovery to be of high quality.”

The solution? A relatively new volatile anesthetic drug called desflurane. Because it is so highly attracted to the brain tissue of the body, the onset of its effects is “incredibly fast” and “very easy to control,” continued Hopster.

That same level of attraction leaves little residual drug left in the body. This, paired with New Bolton’s new state-of-the-art anesthesia machine Tafonius, put Hopster in complete control, making Tiffany’s recovery “the best recovery from a TVEC procedure” that Reef has ever seen.

“I would repeat this procedure identically in the future,” she added.

“The overall team approach – including all of our resources – made the entire procedure so smooth,” noted Hopster. “It was perfect.”

Care at the Comfort of Home

With the TVEC procedure a success, Tiffany has since returned home to continue her rest, but making sure her heart continues to maintains healthy sinus rhythm is of upmost concern.

To help keep an eye on the mare’s progress, Reef suggested Cole purchase an AliveCor device; a personal, medical-grade EKG that takes 30-second snapshots of her heart’s performance. Once complete, the results are delivered directly to Cole through an app on her smartphone that she then sends to Reef for review.

For Cole, this above-and-beyond attention and care has made all the difference.

“Dr. Reef has been absolutely wonderful,” she noted. “I so appreciate her attentiveness in following-up, even after Tiffany has come home.”

“Everyone was so thorough – especially with the level of care and preliminary work prior to the procedure,” Cole continued.

“Everything about Tiffany’s experience has been exceptional – I am so thankful for the New Bolton team and all that they have done in saving our girl’s life.”

From “An Affair of the Heart”, by Hannah Kleckner, September 2017, Penn Vet Extra, University of Pennsylvania School of Veterinary Medicine. Reprinted with permission. http://www.vet.upenn.edu/about/press-room/publications/penn-vet-extra/penn-vet-extra-september-2017/an-affair-of-the-heart