Vanity is a 15-year-old KWPN Dutch Warmblood mare who lives in Austria with her owner and friend, Sandra. Vanity is Sandra’s first horse. They first met back in September 2013. Sandra was a student at the time, and working part-time to help pay her way through school. She was looking for a horse she could lease part time. She posted her interest on Facebook and received plenty of offers from different horse owners, however one stood out from the rest---it was a message from a gentleman describing a great mare he owned named Vanity, with attached photos.

The mare was strikingly beautiful, but Sandra could tell from the photos that the mare was boarded at an expensive stable, and surely would be out of her budget range. However, the gentleman assured her that they could work something out, and that she should at least drop by and see his horse. After some reflection, Sandra decided to at least go see the mare, and brought her mom along.

When Sandra first laid eyes on Vanity she recognized her right away---the mare was every bit as beautiful as she appeared in the photographs. However, she was also kind of fat, poorly muscled, clearly out of shape, stubborn, not well trained, and had zero manners. But…Sandra absolutely adored her.

Sandra bonding with Vanity
Sandra and the gentleman worked out a fair price she could afford. After several months of working with Vanity, her owner announced to Sandra that he was planning to sell the mare. Sandra really liked the mare and she could tell Vanity liked her---she decided she had to find a way to buy her. First, she relocated the mare to a more affordable stable. Second, Sandra ordered a pre-purchase exam and conducted some background research into Vanity’s history.

Sandra discovered that Vanity was bred and born in Holland in June 2002, where she later trained to be a show jumper at a young age. Although she was sold as a high level show jumper, she never ranked very well at jumping competitions. Vanity had a reputation for throwing off even the most experienced riders---who insisted she was “a crazy horse---not quite right in the head that one!”, and sold her to the person Sandra was looking to purchase her from. Using the background information on Vanity and the pre-purchase exam, Sandra was able to use both to her advantage during negotiations on price. In March 2014, Vanity officially became Sandra’s horse.

When Sandra first began riding Vanity, and then periodically in phases, whenever they started cantering Vanity would start to act up—taking off at high speed and bucking, and mixing up canters; in Austria this is referred to as “Kreuzgalopp”, meaning her hind legs are in right gallop and front legs in left gallop, while doing flying changes from everywhere to anywhere, left, right, right, left.

How Vanity would act during one of her phases
The mare would also be difficult to catch in the pasture but only in her phases. Sandra was patient and kept working with her, putting a lot of focus towards gaining Vanity’s trust. Eventually things improved however Sandra found the Vanity would periodically act up, where she'd go through another one of her phases. As a result, Vanity became known as the “crazy horse” at the stable. 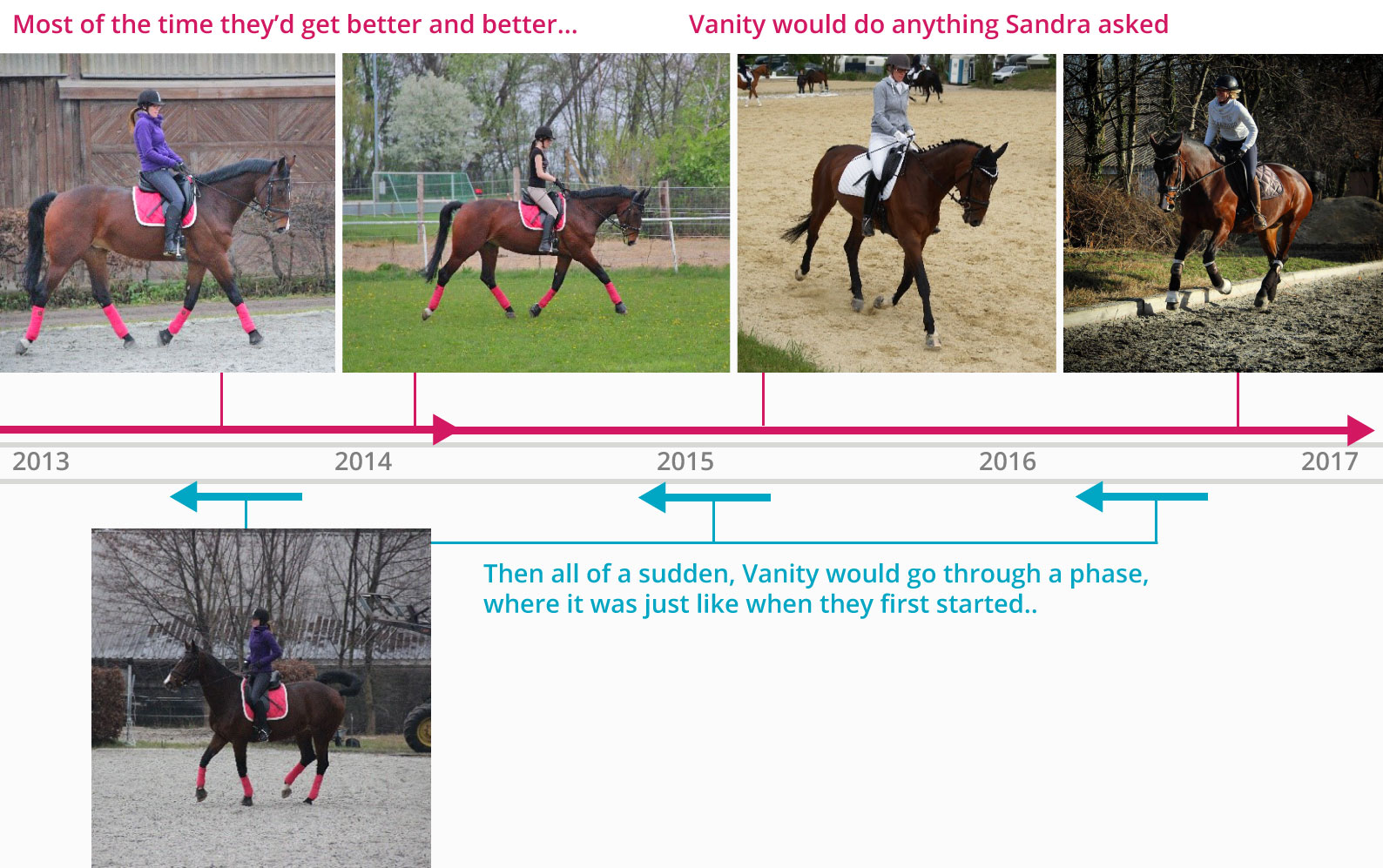 During this time, Vanity received regular chiropractic adjustments with an equine chiropractor every 6 months and even more frequent evaluations with a veterinarian who specialized in equine osteopathy. Both forms of complementary medicine involve the use of manual therapy, with a large focus on the horse’s back; both vets were trained to recognize a horse with back problems. Neither vet thought Vanity suffered from any sort of back pain.

In fact, not one of the 10-15 different vets who frequently visited Vanity’s stable ever suspect that she suffered back pain. Whenever Sandra asked any of doctors to examine Vanity, afterwards they’d always state how they thought she had a ‘perfect topline’, and that her back showed no abnormalities. They’d each claim the reason Vanity acted up when ridden was in relation to her ‘mare hormones’---or that the mare was just crazy. She even received medication for the hormones – from herbs up to real hard hormone drugs in fact.

Sandra knew that something had to be going on with Vanity. She knew the mare wasn’t crazy and decided it was time she get some answers. Since none of the vets at the stable were able to figure out what was wrong with Vanity, Sandra decided to make an appointment for her at the veterinary clinic Pferdeklinik Pasterk Ebreichsdorf in Magna Racino. April 2017, Sandra arranged to borrow her friend’s horse trailer, and drove Vanity to the clinic, which was only a 30 minute drive from the stable.

Upon arrival, Sandra and Vanity were greeted warmly by the veterinarians and staff at the equine clinic, and Vanity was provided a bright, big box stall with lots of hay to eat while Sandra checked them into the front office and squared away their agenda for the day.

Vanity waiting to get off the trailer (left photo) and resting in a stall at the vet clinic (right photo)
Initially, the doctors were convinced that Vanity’s naughty behavior was hormone related—specifically to a possible “tumor on the ovary”. To confirm this, they doctors took samples of Vanity’s blood for a complete blood count (CBC) and hormone analysis to send off to a diagnostic laboratory. The next step was for the doctors to take radiographs (xrays) of Vanity’s back. The veterinarians advised Sandra that they didn’t expect much from taking these, since Vanity’s back looked well-muscled and she had no pain reaction to them touching her back. The main reason they were even doing the xrays was for the sake of completeness, and for them to officially rule out any issues with the back.

However, to their astonishment, the radiographs revealed that Vanity suffered from Dorsal Spinous Process (DSP) impingement, otherwise known as “kissing spines”. Another veterinarian who worked at the clinic, who was also an equine chiropractor, came to inspect Vanity’s back. She was the first to recognize just how tense the mare’s muscles were in her back.

Radiographs taken of Vanity’s back

The goals for Vanity’s treatment were to help reduce pain with mesotherapy and chiropractic adjustments, and to manage the condition through physiotherapy.

Mesotherapy: Vanity received mesotherapy the same day as her diagnosis. It is a technique which involves the use of multiple, shallow injections of certain medications along the back by injecting the mesoderm (the middle layer of skin) with very fine needles. This process is intended to help stimulate the sensory nerve fibers which, once stimulated, help block or inhibit signals that come from them which detect pain. 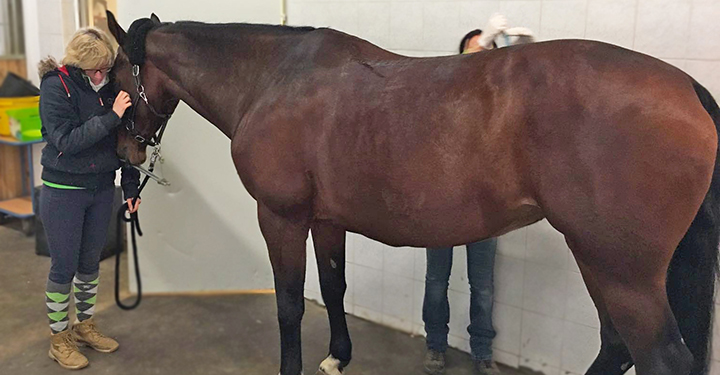 Vanity receiving mesotherapy
Physiotherapy: This was an essential component in managing Vanity’s kissing spines. It was important for Vanity to build up the “core” muscles which support her back. For the first 3 weeks after receiving mesotherapy, Sandra and Vanity strictly did lunge work---no riding, to give a chance for Vanity’s muscles to recover. Lunge work included the use of ground poles, cavaletti, and dual lanes, in the form of Equikinetic.

Vanity lunging exercises
Aqua Treadmill: While performing lunge work, Sandra trailered Vanity to the vet clinic twice a week for aqua treadmill exercise sessions. The use of the high water level is beneficial for building up a horse’s back muscles, since they are forced to increase their stride length and decrease stride frequency---resulting in increased back extension and flexion. 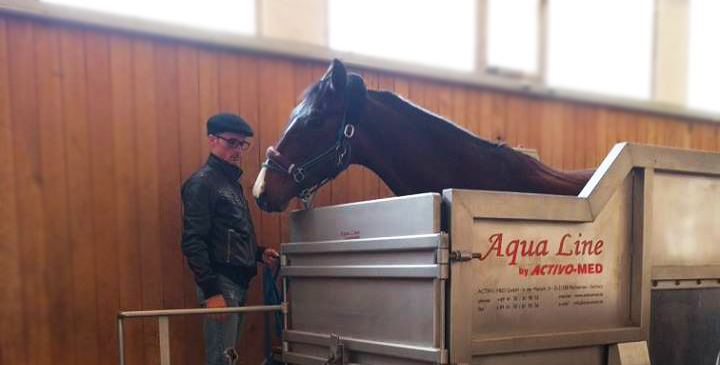 Vanity in an aqua treadmill exercise session
Saddle Refitting: Sandra had a new customized shock absorbing saddle pad developed for Vanity, by her saddler (who also helped to ensure Sandra’s saddle fit Vanity’s back properly). He would even travel with Sandra and Vanity to the veterinary clinic to discuss different options with the vets.

Vanity's special saddle pad. It was made with Tempur memory foam, making it highly shock absorbing!

Back Warmth: Sandra makes every effort to keep Vanity’s back warm, through the use of Back on Track’s Therapeutic Horse Back Pad and other means, which helps reduce inflammation and keeps her back muscles flexible.

Vanity in her Back on Track Therapeutic Horse Back Pad.

Back in the Saddle

Four weeks after Vanity was first diagnosed with kissing spines, Sandra was able to start riding her again. From then on, Sandra keeps to a strict routine each time she rides Vanity, making sure to always incorporate in the following elements:

What Sandra’s learned from this experience

“Most of all, I learned to trust my instincts and to never give up and that’s what I want to tell all the other owners out there. Sometime you might need to be stubborn and try out a lot of things but it’s worth it. Kissing Spines is dependent on how well you manage and how carefully you train your horse and listen to your horse, but it is not automatically a reason for not being able to enjoy time with your horse anymore.

Know your enemy. I am a very curious and passionate person, so after the first shock with kissing spines diagnosis and the first wave of despair, I took my books and laptop and got creative. I thought about the anatomical components, training, feeding, etc. and developed a framework and training routine for Vanity, which I strictly followed – of course dependent on Vanity’s daily constitution.

Sandra doing research to learn all she could about kissing spines
In my mind, it is important to find a balance between the strict routine and the flexibility to react to a certain constitution properly and with enough sensitiveness. We – spoken as “we horse owners” – are responsible to provide the horse with everything he needs to feel comfortable and to be able to bring the performance we want to have. You will need to go back to basics and from there build up the frame you and your horse need.

Never stop, never quit. According to most people in my stable and even friends, I should have retired Vanity after the diagnosis because “you cannot ride or train a kissing spines horse”. It is common for most people that horses with such problems are in pain every second a day and should be retired. Nobody thinks about the muscles horses lack when just standing around and not being trained – but aren’t this muscles essential for supporting the weak kissing spines back? Vanity is 15 years old, she has severe kissing spines but we live with it and we are doing quite well – nobody would have thought that – me neither at first :)

Sandra and Vanity winning 1st and 4th place in a show jumping competition, this past August--just a couple months after treatment even!
Keep in close contact with my vet and the clinic as it is important to receive regular feedback, being proactive and react accordingly if necessary.

Listen to the people, inform yourself and talk to other kissing spine horse owners, there are so many benefits in exchanging experiences. But do not let people influence you, concentrate on your horse because you have a bond and this is your strength.”

Vanity enjoying life with her bestie, who was also recently diagnosed with kissing spines!

Follow Sandra and Vanity and keep up with their adventures:What I’d like to say too, is that I’m so thankful that Vanity did so many things for me even suffering from her back pain, she jumped for me, trusted me, we did dressage and so many more things within the years, she never stopped trusting me even though there were these stupid kissing spines already making her suffer. She always gave 100% for me, these 100% she could give at this time. Other horses would have kicked me for even thinking about saddling up, she never did. I admire her for this trust and I love our bond