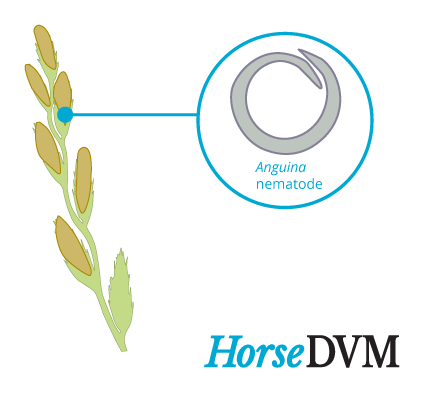 R. toxicus produces yellow slime-like material and corynetoxins to aid in its invasion. Horses grazing on grass or hay infected with corynetoxins, will eventually develop clinical signs of ARGT. All grazing animals are at risk of ARGT.

Cases of poisoning were first recorded in Australia in 1956, followed by outbreaks in South Africa in 1981 and Japan in 1997. A. funesta has been reported in annual ryegrass in Oregon, along with reports of ARGT-like poisonings of livestock in Oregon in the 1940s and 1960s, although the cause was never confirmed.

Early clinical signs are: loss of leg coordination, high head-holding, and arching of the back. Muscle tremors, intermittent body convulsions, head nodding, teeth grinding, and involuntary eye movement often follows soon after. During the later stages of ARGT, horses are seen lying on their side making walking motions. Clinical signs may be seen over a period of several weeks duration.