Different species and sexes of beetles have differing levels of the amount of cantharidin in their bodies, varying from 1 to 11.3% of their dry weight. This variability in cantharidin content has resulted in a wide range in number of beetles reported to cause death in horses--fatal poisonings have occurred from a few beetles to as many as 200. 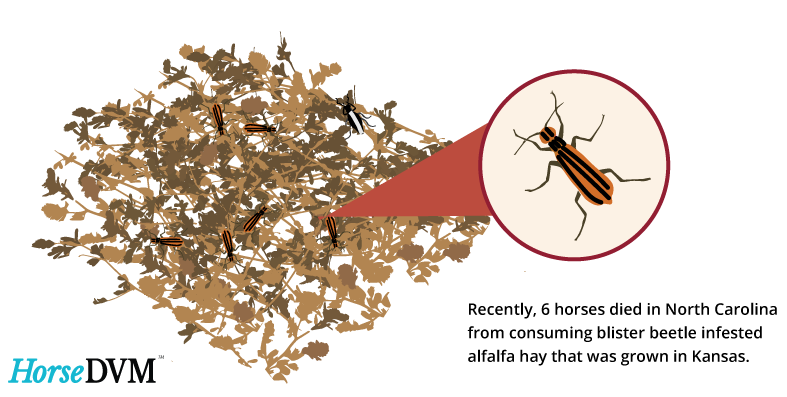 Blister beetles are attracted to alfalfa, especially the flowers, and are most abundant during the mid-summer months, and thus more likely to be found in second cutting of alfalfa hay bales. In general early and later cuttings of hay are less likely to have beetles present.

Unfortunately, blister beetles have a tendency to congregate in large clusters along field margins rather than spread out, which increases the likelihood that large numbers of beetles can become harvested within the hay. When the hay is cut and baled at the same time, generally with a crimper, this makes it harder for the beetles to escape the harvesting process and traps them into the hay. Therefore, it is better to purchase alfalfa where a crimper was not used. This means the hay was cut and left to dry then baled at a later time, which allows the beetles time to escape.

If horses eat blister beetle contaminated hay they usually develop blisters in their mouths and in their gastrointestinal tract, resulting from the irritation caused by the toxic substance (hence why the beetles are referred to as "blister beetles"). The severity of clinical signs vary depending on the amount of beetles ingested. Most horses develop a reduced appetite, lethargy, colic signs, and seen dunking their mouths into the closest water source. Horses may also be seen stretching out to urinate, and making frequent attempts to urinate.

Treatment is aimed at reducing further absorption of the toxin, preventing dehydration, correcting electrolyte abnormalities and reduction in pain. Most horses will require hospitalization for a few days to possibly a week or more.

Depends on the amount consumed, and how fast treatment is sought.