Gasterophilosis is caused by a build up of larvae produced by the horse bot fly (Gasterophilus spp.), which is an internal gastrointestinal parasite of horses. Adult bot ﬂies deposit their eggs on the horses’ haircoat, at different locations depending on the species of ﬂy. There are approximately 9 different species of bot flies that exist worldwide. Some of the most common species include: 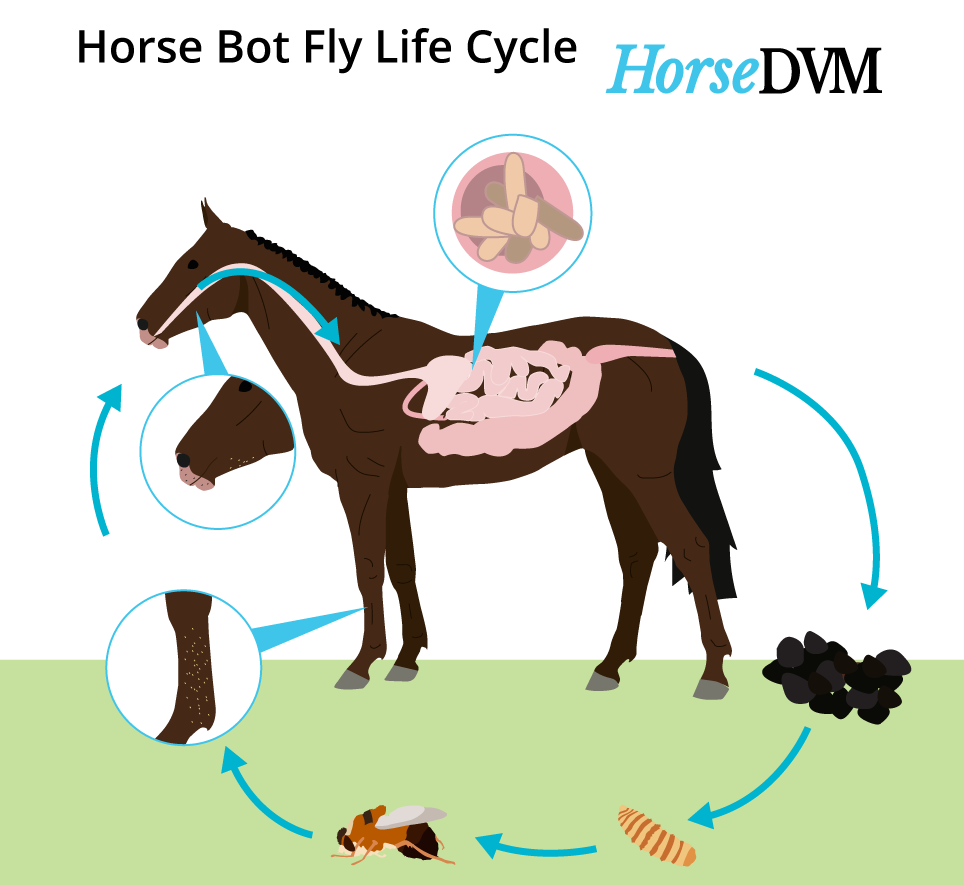 A single female bot fly may lay from 150-1,000 eggs. The botfly's eggs are typically ready to hatch within 7-10 days of being laid, however remain dormant until the area where they are present is licked or bite by the horse. Horses will accidentally swallow the eggs when they lick the areas where the eggs were laid by the fly. Upon ingestion, the sudden increase in temperature of the horse's mouth stimulates the eggs to hatch. Once hatched, the bots enter the horse through their mouth and travel down the esophagus in order to migrate into the stomach where they attach themselves to the lining of the stomach wall. The larvae damage the horse by interfering with the passage of food, causing stomach lesions that can become a site of secondary infection and by causing restlessness when the larvae are in the rectum prior to passage. When mature, the larvae release from the stomach and are passed with the feces. The larvae freshly shed within the feces of the horse, will burrow beneath the soil surface and pupate. Adult flies will emerge from the pupae in 20 to 70 days.

Bot eggs are most frequently discovered on horses during late summer and early fall and remain until the first hard frost. Eggs are characterized by tiny, yellow specks on the horses' legs, mane and flank.

If left without treatment it can eventually lead to a gastrointestinal impaction, presenting as colic.