Horses can sometimes accidentally step on, roll over on, or stand too close to mounds constructed by the non-native red imported fire ant, Solenopsis invicta, while turnout out in pastures. When fire ant mounds are disturbed, the ants rapidly respond by attacking the cause of the disturbance with painful simultaneous bites and stings, composed of piperidine alkaloids. This results in redness, itchiness, swelling, and the formation of pus-filled blisters which may last an average of 3 to 8 days before scabbing over.

Fire ants are an invasive ant species which is known for its highly aggressive behavior and large colony formations. They are found throughout the southeastern United States.

They build their mounds in almost any type of soil, and prefer open, sunny grass fields, hence why they are often found in horse pastures. They may also be found underneath buildings, around tree stumps, electrical junction boxes, and inside rotting logs. Mounds containing colonies of ants can reach up to 18 inches in height, depending on the soil type. The ants use underground tunnels to enter and exit.

To control fire ants, you need to use a combination of broadcast fire ant bait---which is used to treat over an entire section of pasture, and treat individual mounds. There are several different companies which make fire ant bait and insecticide products, however most require several treatments. While treating areas within horse pastures, temporarily fence off areas to prevent horses from accessing the baits and insecticides. Studies have found that Vaseline and baby powder may be semi-effective methods of repelling fire ants. 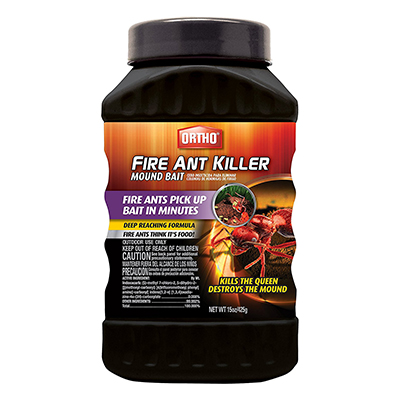