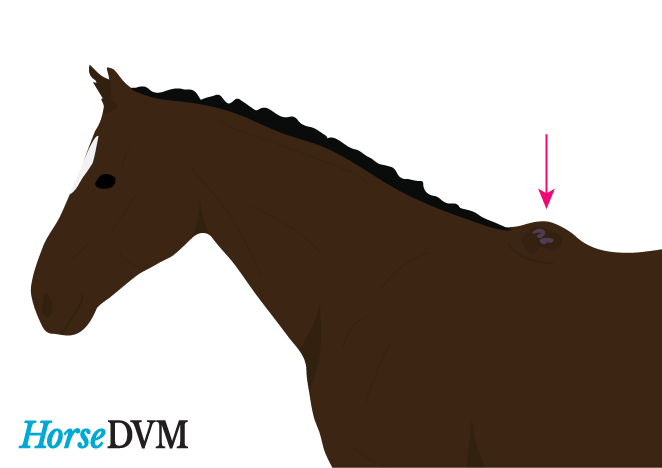 Onset of clinical signs is usually abrupt or insidious. Clinical signs that are most often observed during the early stages of fistulous withers is the development of localized pain, heat, and swelling at the location of the withers without obvious external fistulation or exudate. Some horses present concurrently with general stiffness and/or lethargy. Once this bursa ruptures, it releases purulent exudate, draining from the fistula which usually contains multiple bacteria. The most common bacterial organisms isolated from horses with fistulous withers are Staphylococcus aureus, Streptococcus spp., Actinomyces bovis, and Brucella abortus (the causative agent of Brucellosis). Brucellosis is a febrile zoonotic disease found in domestic and wild animals worldwide. Cattle, sheep, pigs and goats are the species most commonly infected, and when contracted by horses, is usually associated with the mixed presence of cattle and horses.

Solitary lesions along the back and withers
Swelling, hear and pain in the withers area
Mounds of granulation tissue emerging from eroded skin
Lethargy
Generalized stiffness