Poison Parsley, Spotted Hemlock, Winter Fern, California Fern, Nebraska Fern,Wild Carrot, Fool's Parsley, Snake Weed, Poison Root, Cige, Bunk, Cashes, Cicuta, Winter Fern
8/ 10
Poison hemlock (Conium maculatum) is an annual or biennial herb of the Apiaceae family. It is native to Europe and western Asia and was introduced into North America in the 1800s as an ornamental but has since then, escaped cultivation and now widely distributed across much of the United States and adjacent areas in Canada. As a biennial, poison hemlock produces leaves as a basal rosette it's first year of growth, which develops into an upright flower stalk during the second year.

Poison hemlock contains eight piperidine alkaloids, however y-coniceine and coniine are generally the most abundant and the predominant cause of acute and chronic toxicity in horses. Coniine is a pyridine derivative similar in structure and function to nicotine. These toxins have a direct affect on the horse's nervous system, neuromuscular junction, and brain. 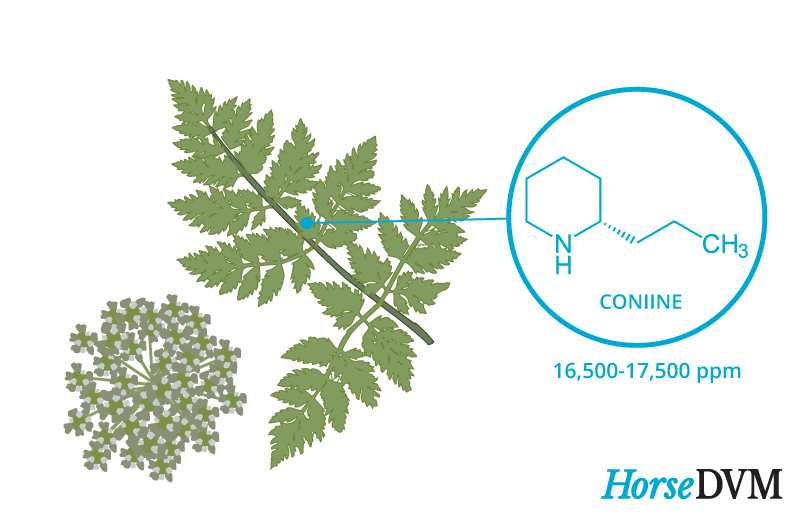 Poison hemlock toxicity varies depending on the stage of growth, environmental conditions (rain, temperature, cloud cover), and soil. Toxicity increases throughout the growing season, especially in the roots, which resemble parsnips. Although all parts of the plant are toxic, the most toxic parts are the fruits when they are still green, and stems.

Signs of poison hemlock poisoning in horses develops 1 to 2 hours after ingestion. Horses don't typically graze hemlock unless food is scarce or it is contaminated in hay. The lethal dose of poison hemlock ranges from 0.2 to 0.8% body weight or 2 to 8 lbs per 1,000 pound horse.

MECHANICAL: Mow prior to seed production. Hand pull only while wearing gloves as the plant is highly poisonous.

CHEMICAL: Use a broadleaf weed killer such as 2, 4-D to protect bank-stabilizing grasses. Make sure the chemical is labeled for use around water when poison hemlock is growing in a ditch, stream, or wetland.