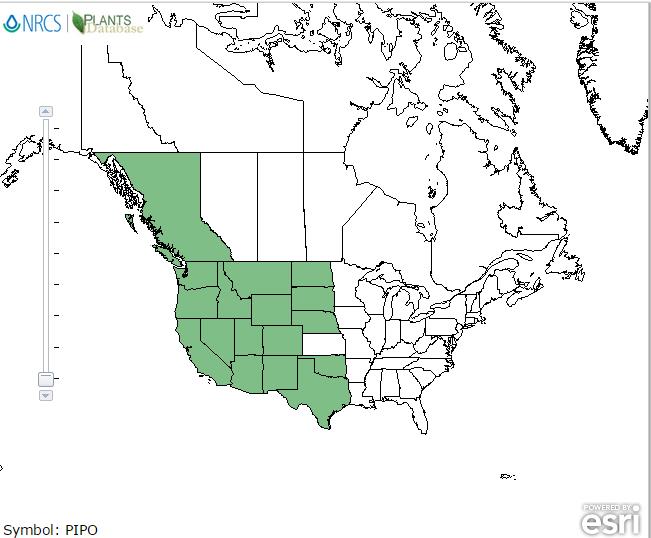 Blackjack Pine, Western Yellow Pine, Bull Pine, Rock Pine
3/ 10
Ponderosa pine (Pinus ponderosa) is a hardy tree native to western United States and Canada. The Scottish botanist David Douglas named this pine for its ponderous or heavy wood. P. ponderosa grow often on dry mountain slopes and mesas. It is recognized by it's tall, straight, thick trunks, clad in scaled, rusty-orange bark that has split into big plates. P. ponderosa is one of the largest pine tree species that is found throughout North America. It has long evergreen needles, thick and flexible, three to a bundle, with droop gracefully from it's branches year-round. P. ponderosa bark is gray to black and scaly on younger trees; it has a distinctive sweet aroma similar to that of vanilla or butterscotch. Old trees have a characteristic yellow bark.

Ingestion of P. ponderosa buds and needles has a long history of causing abortions in cows and sheep. It is thought to be caused by either a pimaric acid chemical contained in the plant parts, or it is the presence of the bacterium, Listeria monocytogenes which results in the disease listeria, which causes abortion. Even discarded Christmas trees have had caused abortion in cows. Abortions may start within 48 hours after pine needles are ingested, and only a small amount of needles is needed. A persistently retained placenta is a constant finding regardless of the gestational stage of the abortion.

P. ponderosa produce reddish-brown cones that are 3–6" in length. It's wood is used extensively for lumber but has also been put to work in windbreaks, buffer strips, reclamation and mass landscape plantings. P. ponderosa lumber is frequently used as poles, saw timber, railroad ties, mine timbers, and fuel.