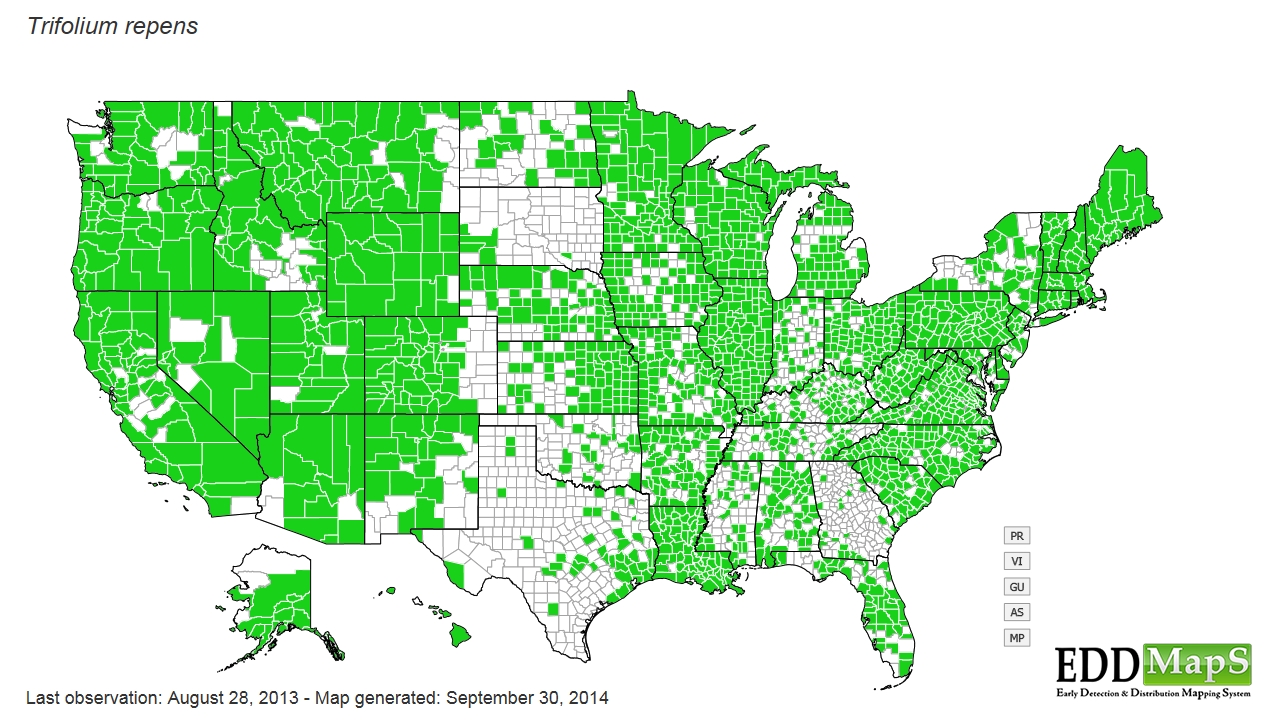 Slobber Syndrome
2/ 10
White clover (Trifolium repense) is a glabrous perennial with trifoliate leaves which is widely distributed in moist temperate zones, Mediterranean areas and some cool subtropical parts of the world. 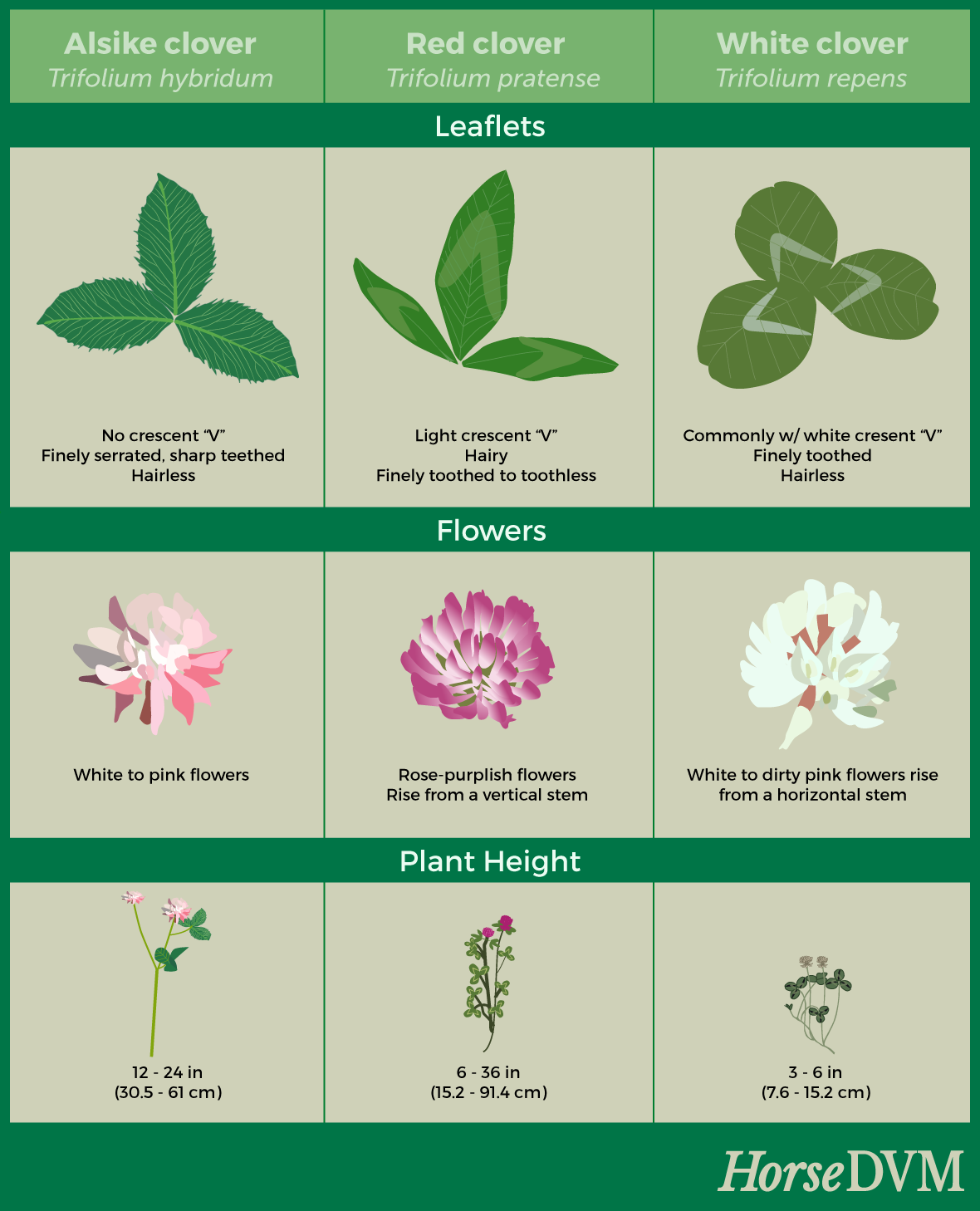 It was originally introduced from the Mediterranean. During the long daylengths and high temperatures of summer, the axillary buds on the stolons produce inflorescences rather than vegetative stolon branches. Most leaves have white "V" mark, and are shiny on the underside, with white flowers. It is accompanied by white florets at the end of long peduncles that are often tinged pink, becoming deflexed with age. 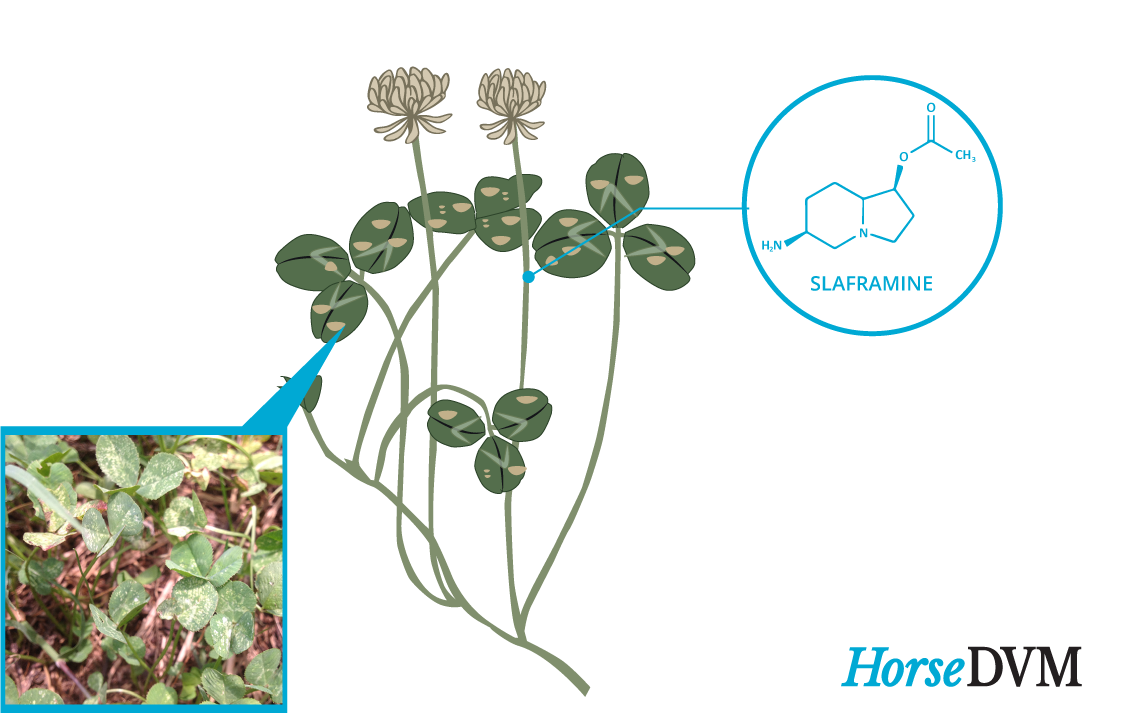 White clover contains cyanogenic glycosides. In young leaves, the cyanogen levels may reach 350 mg of HCN per 100 g of tissue. Cyanogenesis is controlled by two independently inherited genes in white clover. Only plants possessing at least one dominant functional allele of both genes liberate HCN when damaged. Some cultivars are capable of liberating HCN and others are not. White clover can also occasionally become infested with the mold Rhizoctonia leguminicola, which appears as a rust color seen on the top side of the clover leaf. This mold produces slaframine, which is an indolizidine alkaloidal mycotoxin that causes a condition known as slobbers in horses that ingestion it. It appears in pastures during periods of hot and humid weather.

MANUAL CONTROL: Most young weeds can be pulled from the soil. They will slide out most easily if you pull them when the soil is wet. Getting the root up is crucial, so think of the main stem as the root's handle, and grasp it as close to the soil line as you can. If you find that the weeds are breaking off at the crown as you pull, slip a kitchen fork, dandelion weeder, or similar tool under the weed, and pry and twist as you pull it up. Weeds that have taproots, such as dandelion and plantain, usually must be pried out.

Slicing and dicing weeds with a hoe works best when the soil is relatively dry, and the same goes for cultivating with a tiller. With their tops mangled and roots cut, most young weeds will quickly shrivel up and die. Be careful to cultivate only the top inch or two of soil or you may injure nearby garden plant roots and drag new weed seeds to the surface. A sharp hoe works much better than a dull one, so refresh the edge on your hoe with a steel file between weeding sessions. After using either a hoe or tiller to cultivate weeds, go back the next day to nip out any survivors. When battling perennial weeds, you can weaken the plants by chopping them down with a sharp hoe, but it's best to combine hoeing with digging to achieve good control.